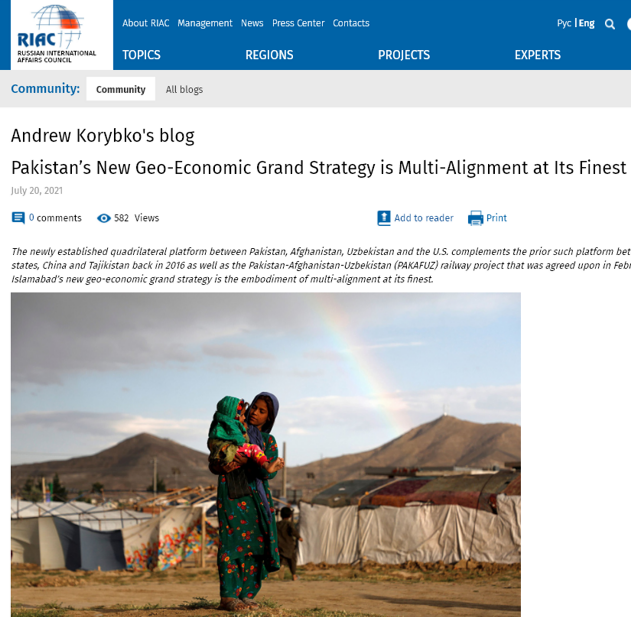 July 24 (EIRNS) — Moscow-based American foreign affairs expert Andrew Korybko writes on his blog on the website of the Russian International Affairs Council (RIAC), that the ongoing settlement of the Afghanistan war is putting “geo-economics” ahead of the zero-sum game of geopolitics. He writes that “geo-economics” is at the center of the cooperation among the U.S., Russia, China and Pakistan in seeking an Afghan settlement and the creation of the so-called “Quad” of Uzbekistan, Afghanistan, Pakistan and the United States which was created on July 16 at the connectivity conference in Tashkent, Uzbekistan. This latter, Korybko writes, “complements the prior such platform between the former two states, China and Tajikistan back in 2016 as well as the Pakistan-Afghanistan-Uzbekistan (PAKAFUZ) railway project that was agreed upon in February.”

Crucial to the development according to Korybko is Pakistan’s new “Geo-Economic Grand Strategy Is Multi-Alignment,” which was adopted during March’s inaugural Islamabad Security Dialogue, where it was announced that geo-economics will now constitute the basis for all policy formulation and not geopolitics. The first fruits of the policy was the creation of the so-called Quad platform among Pakistan, Afghanistan, Uzbekistan, and the U.S.

Korybko writes: “Pakistan is actively fulfilling its geostrategic destiny as the ‘Zipper of Eurasia’” by connecting a variety of stakeholders through their shared economic interests. “Islamabad is leveraging its influence in Afghanistan to advance the neighboring country’s peace process, which saw it facilitate Beijing and Moscow’s incipient ties with the Taliban. Upon these multipolar great powers establishing pragmatic political relations with the group, they were then able to seriously countenance the viability of trans-Afghan connectivity corridors. Russia is interested in reaching the Indian Ocean Region through PAKAFUZ (which can also unofficially be conceptualized as N-CPEC+), while China is pioneering the so-called “Persian Corridor” to Iran via Tajikistan and Afghanistan. The U.S., meanwhile, aims to use PAKAFUZ as a means for expanding its economic influence in the post-withdrawal Afghanistan and the Central Asian republics (CARs).”

As for India, it is finding itself left out of the process, he writes, because it is maintaining a geopolitical policy aimed at countering Pakistan. Nonetheless, he believes now India has begun to seriously reassess its policy away from geopolitical principles, which of course will require an improvement of relations with Pakistan. One option would be reversing the August 2019 abrogation of Article 370 which dismantled the autonomy of Jammu and Kashmir to bifurcate the region, which would admittedly be a very difficult political decision.

He concludes: “The very fact that the U.S., which is known for its geopolitically driven zero-sum policies, is joining together with Pakistan, Afghanistan and Uzbekistan in order to expand its economic influence in Central Asia speaks to just how dramatically everything is changing.”