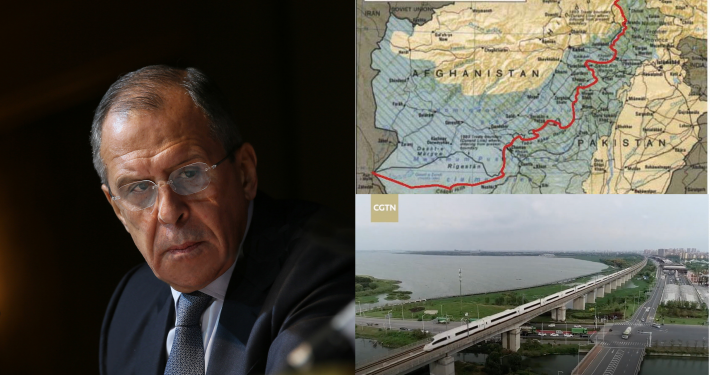 July 20, 2021 (EIRNS)—Russian Foreign Minister Sergey Lavrov captured the potential world-transforming change which can be brought about, if the nations of the world join together in developing Afghanistan and the Central Asian nations, when he addressed the plenary session of the conference on “Central and South Asia: Regional Connectivity, Challenges and Opportunities” in Uzbekistan on July 16.

“The representative nature of this event is vivid proof of the increasing demand for a unification agenda in Eurasia and the rest of the world,” he began, in thanking Uzbek President Shavkat Mirziyoyev for organizing the conference. He situated the building of connectivity between Central and South Asia within the greater project of developing the giant continent of Eurasia as one “seamless, united logistical” economic hub of transportation, trade, power, development.

“Russia has been consistently in favor of forming the Greater Eurasian Partnership, a congregative integration contour in the entire space from the Atlantic Ocean to the Pacific, one that is maximally free for the movement of goods, capital, the workforce and services, and open, without exception, to all the countries of our common continent, Eurasia, and the integration unions created there, including the Eurasian Economic Union (EAEU), the Shanghai Cooperation Organization (SCO), and the Association of Southeast Asian Nations,” all organizations which have displayed an interest in this initiative, Lavrov explained.

“Implementing this long-term project will make it possible not only to accelerate the economic development of all participants but also to create a reliable material foundation of common security, stability and prosperity.”

He cited, in particular, the efforts which seek to integrate the EAEU plans and the Belt and Road project and “the North-South International Transport Corridor linking Europe, and the South Caucasus and Central Asia with the Indian Ocean coast, as well as to the Europe-West China transcontinental transport route.”

“In this broad context, higher connectivity between Central and South Asia is opening new vistas for the development of trade, economic and investment processes on the Eurasian continent….”

This will not happen without a comprehensive settlement of the Afghanistan conflict, he argued; “only direct and inclusive intra-Afghan talks with the support of international partners can lead to a lasting peace.” Lavrov named three “tried and tested mechanisms” as key to mobilizing that support: the Shanghai Cooperation Organization-Afghanistan Contact Group, and the two known as the “Moscow format” and the “extended Troika,” the latter formed by the US, Russia, China, and Pakistan working together.

When a reporter at Lavrov’s discussion with the press in Tashkent asked him if he thought the U.S. had deliberately carried out its withdrawal in such a way as to cause trouble in Russia’s “area of geopolitical interests,” Lavrov refused to take the bait. “I do not believe in conspiracy theories. I heard that perhaps this hasty withdrawal was in pursuit of some kind of geopolitical goals. We should not speculate about it.” Russia is “not interested in chaos” in Afghanistan, and “we will continue working with the Americans in the extended Troika format, as well as with all other countries that can influence the situation in Afghanistan,” he answered.