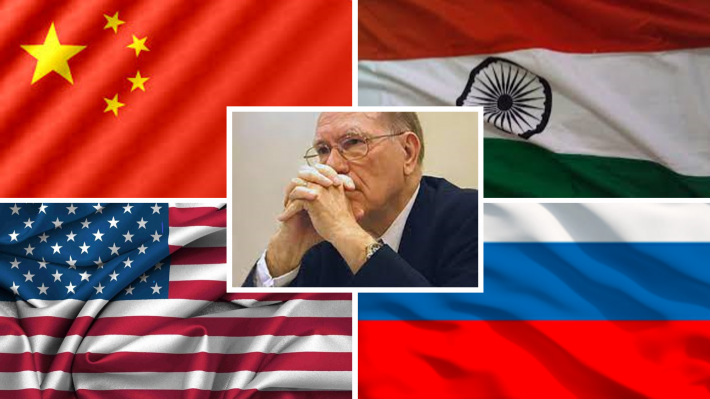 June 21 (EIRNS) — Andrey Shushentsov, Program Director of the Valdai Discussion Club and Director of the Institute of International Studies at MGIMO University, argues in a short essay published on the Valdai Club website that a strategic dialogue among the United States, Russia, China and India is necessary to prevent the current state of affairs from devolving into open conflict. However, Shushentsov limits himself to the necessity of preventing the geopolitical confrontations now in play from turning into military conflict without ever mentioning the positive potential of those four powers to create a new world credit system as defined by Lyndon LaRouche in 2009.

“In a chaotic environment, the leading powers seek to secure themselves a privileged position in the international system and limit the opportunities for their key competitors,” Shushentsov writes. He notes in the first part of the essay that these four countries are the most powerful nuclear powers and have four of the world’s six largest economies. He notes further the strategic competition between America and Russia, between America and China–including the U.S. effort to rope India into the “Quad” vs China, and the positive relations between Russia and India. “Unprovoked crises or spontaneous episodes of conflict in relations within the Big Four nuclear powers can disrupt progressive global economic processes,” he writes further. “In this regard, these four powers should be mutually attentive and prudent, channeling their rivalry into a non-military area.”

Therefore, Shushentsov writes, “It is the responsibility of the expert community of the four countries to carefully study the train of thought of their competing partners in order to exclude the sudden development of a conflict. In this regard, it seems reasonable to create a permanent format for consultation among the high-level experts of Russia, the USA, China and India. To ensure that mutual deterrence does not lead to strategic disruptions and war, it is necessary to manage relations, emphasizing an interest in cooperation with respect to common areas, such as climate, the ecology, digital development, space, mining, demography, migration and counteracting natural disasters. The purpose of the high-level consultations is to prevent a shift from strategic containment to impulsive attempts to break the emerging status quo,”

He concludes. “The formation of a stable dialogue format for the four leading global powers in the 21st Century will make it possible to minimize the likelihood of an impulsive breakdown into open conflict, the potential for which remains a factor in global politics.”