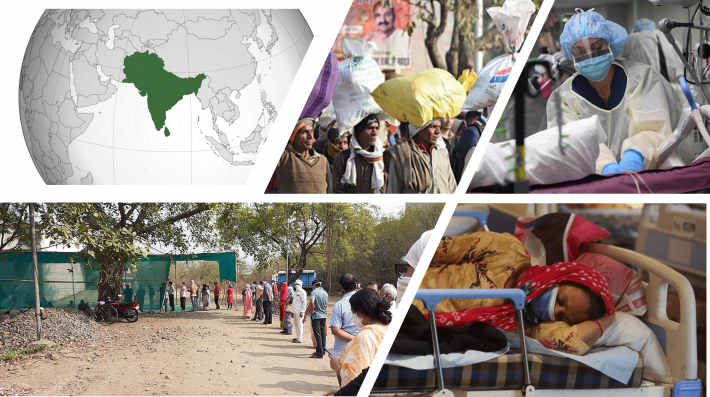 May 13, 2021 (EIRNS)—With record-breaking daily deaths, the total official COVID-19 death toll in India surpassed a quarter-million yesterday. The daily new cases continue to hover just under 400,000, with some experts forecasting that daily infections will peak at about a half-million sometime in June. The country now accounts for about half of all new COVID-19 cases and 30% of deaths worldwide, according to the World Health Organization (WHO). WHO has also designated the B.1.617 variant as a matter “of global concern,” given how highly transmissible it is. The Pan American Health Organization reported that the Indian variant has shown up in six countries in the Americas.

Numerous experts continue to report that the total infections and total deaths are probably 5-10 times higher in reality than the official numbers indicate. A large portion of the uncounted numbers remain in India’s countryside.

There is a major discussion going on inside India over how much to lock down and for how long. Dr. Balram Bhargava, head of the Indian Council of Medical Research, said in an interview yesterday that lockdown restrictions should remain in place in all districts where the rate of infection is above 10% of those tested, and that they should stay locked down for at least 6-8 weeks. Test-positivity rates above 10% now prevail in 75% of the country’s 718 districts, including major cities like New Delhi, Mumbai, and the tech hub of Bengaluru, according to Reuters’s May 12 report.

“The high positivity districts should remain (shut). If they come to 5% from 10% (positivity rate) we can open them, but that has to happen. That won’t happen in six-eight weeks, clearly,” Bhargava said in an interview. In Delhi, the positivity rate reached around 35% but has now fallen to about 17%, Bhargava said: “If Delhi is opened tomorrow, it will be a disaster.” Bhargava has been calling for a government-ordered lockdown in with a 10% positivity rate or higher since April 15. Prime Minister Narendra Modi preferred to leave the decision for states to decide, perhaps because of his concern that extensive lockdowns could lead to uncontrolled social explosions in the desperate population.

Absent an international joint attack on the root causes of the pandemic—50 years of global physical economic collapse, especially in the health and food areas—India, like most developing nations, is left with only two disastrous choices: don’t lock down and watch the pandemic spread like wildfire; or lock down, and drive millions of poor and unemployed or marginally employed people over the edge.