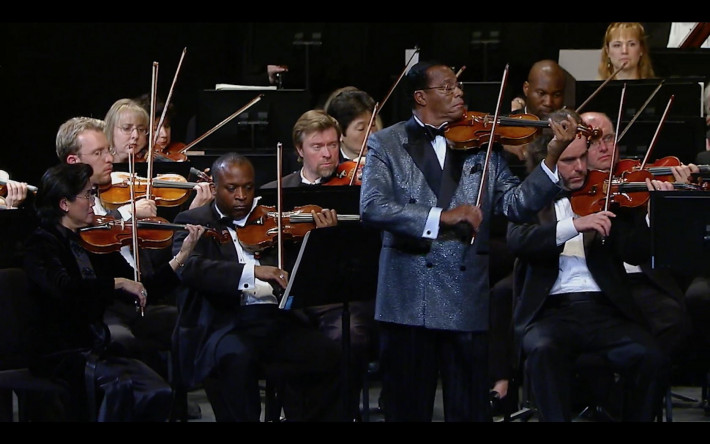 May 12 (EIRNS)–In celebration of his 88th birthday, and of Beethoven’s 250th birthday, Minister Louis Farrakhan, leader of the Nation of Islam, made a loving intervention into a crisis-torn world: he released the video recording of his performance of the Beethoven Violin Concerto, which he had done in 2002, but which, for various reasons, had not been able to be released earlier. The concert included a performance of Beethoven’s 5th Symphony, followed by the concerto.

Due to the livestream, which was affected by internet receptivity, at least from this author’s vantage point, there were moments where it wasn’t clear if the orchestra was as together as it might have been at every moment. Also, in some of the very difficult passages of the concerto every note Farrakhan played wasn’t perfectly in tune, but as Ayke Agus, the violinist who agreed to work with the Minister on preparing the performance on a miraculously rapid schedule, and who was the concertmistress for the performance, said, the musical quality and the truthful, non- pretentious intent of the message transcended all technical shortcomings, which were probably not even noticed by most. Certain lyrical sections were absolutely gorgeous, with a beautiful singing quality, and the extremely high notes were beautifully placed, as a great singer would do.

The video was introduced by Farrakhan’s grandson, and then Cornel West, who spoke about the power of Beethoven’s music to unite people, but the most striking comment he made was, (paraphrase) “I have some very deep disagreements with the Minister, but I love him.”

From Farrakhan’s coach, Cornel West and the Minister, the story emerged of the Minister having attended a concert in 1942 or 1943 in Boston of Beethoven’s 5th Symphony, followed by Jascha Heifetz performing the Beethoven Violin Concerto in a way which profoundly moved the young boy. He got Heifietz’s autograph on the program, which he has to this day. He clearly had enormous talent as a child, but the nation was not ready for a black Classical violinist, and he put his instrument away for 40 years.

When he picked it up again his teacher was Elaine Skorodin Fohrman, herself a student of Heifetz, who assisted him in preparing the Mendelssohn Violin Concerto, but who was not convinced that he could master the Beethoven in such a short time (or any time under 10 years.) While her reluctance persisted, she was nonetheless present in the orchestra, both as moral support, and despite her disagreement.

In Farrakhan’s post-performance comments in 2002, which were included in the video , he introduced two young black violinists who had been part of the orchestra. The first was a 19-year-old young woman, who had sent in a video of herself playing the Sibelius Violin Concerto which left Farrakhan in tears, saying “she can be everything I had ever hoped for someone,” and a young man, who had sent in a video of himself playing the Tchaikovsky Violin Concerto, again causing a torrent of tears. Of these, Farrakhan said, “he is all that I had hoped to be, and then some” — which both addressed racism as the crime it actually is and suggested how to reject the intended effect of that crime, by seizing, through the discipline and gift of Classical culture, a truly human identity despite racism’s evil intention. In this way, when this path is taken, civilization may not be deprived of the moral potential, expressed by the development of great talent into genius which would uplift and transform that entire society. Here is a link to the full concert.