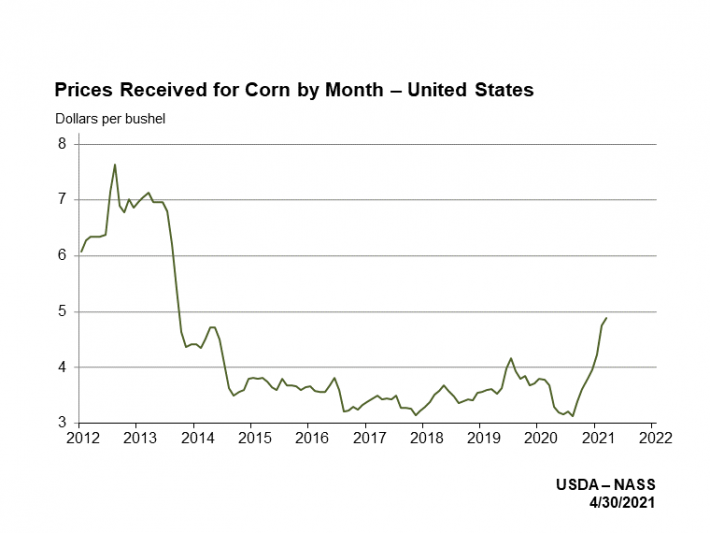 May 10 (EIRNS) – The central bankers’ “regime change” plotted at the August 2019 annual bankers’ summit – senior partner central bank and junior partner government Treasury teaming up to print vast amounts of currency and direct its spending – has been carried out since that time, and now has triggered the start of a hyperinflation.

Bloomberg’s Commodity Price Index is up 62% from April 2020 to April 2021. These are spot market prices, which means not every buyer is paying them. But, nothing like this has been seen since January 1980, at the end of the 1970s “stagflation” and when Paul Volcker as Federal Reserve chair was already crushing the economy to stop it – 10-year Treasury interest rates were then 13%, not 1.5% as now.

Wall Street and the City are very happy, so far, about this rapid inflation in various forms of producer prices, which their corporate clients are passing on to households across the world whose wage income – at best – is stagnant. At “regime change” leader BlackRock, Inc., its global head of thematic investing Evy Hambro enthused on Bloomberg Television May 8, “There’s still quite a lot of room to go. What we’re really doing is we’re testing the upper ranges of commodity markets to work out what the new price range is going to be.”
The UN Food and Agriculture Organization’s global food price index rose in April to 120.9, which represents a 30.7% increase in one year. Food inflation last reached this level in 2011. Corn wholesale prices have surged the most, averaging 142% in the past year. Otherwise, sugars and oils are rising in price most quickly. Economists will “explain” that food prices both to the farmer and at the supermarket have been deflating during most of the 21st Century. But that is not the point: A hyperinflationary policy of printing currency and avoiding productive investment has triggered a sudden and rising inflation, as EIR forecast it would last in the Fall and the EIR Alert in late Summer. This inflation is getting started, and it will not be “transitory” unless the policy is changed radically.

In the United States, the price of the median home purchase is 18% higher than one year ago. While rental inflation had fallen quite low during the pandemic (though the lowest-income renters faced the most inflation!), it is now ready to take off. Two very large rental owners, Invitation Homes and American Homes 4 Rent, are raising rents by 8-11% on all new leases and re-leases.

The April Consumer Price Index, defanged of inflation in every way Federal Reserve and Labor Department economists have been able to devise in 35 years of effort, will be published May 12. It tends to shape Americans’ “expectations” of inflation. That survey by the New York Federal Reserve Bank showed today, for example, that Americans expect home price inflation to be 5.5% in the coming year – when it is already 18% for the median home!