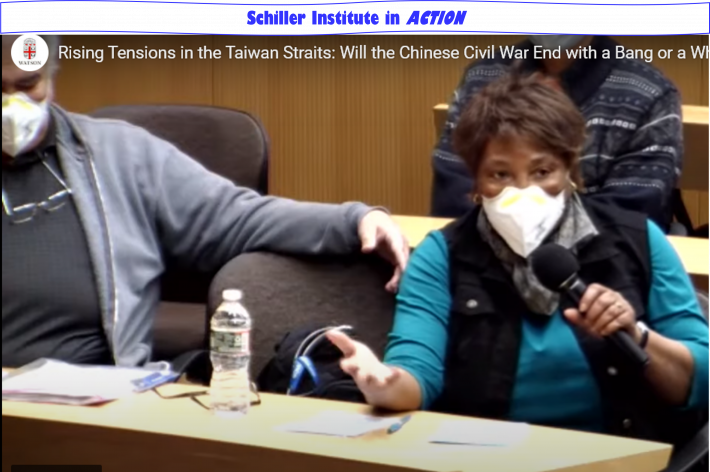 Cloret Ferguson: It’s a pleasure to see and hear both of you. My question is, why would we not seek a more Westphalian approach to the question of China and US relations? For instance, the fact that China has elevated more than 850 million of its own population out of dire poverty and has said that they are reaching out to the whole world, to solve the problem of poverty of the whole world in 30 or 40 years, why would we not approach these relationships and take that branch as a means to solve the problem on a much more noble plane? Why would we not accept this as the pathway for relations between China and the US instead of dwelling on the past. We have the biggest military arsenal in the world!

Chas Freeman: The military industrial complex is us. We have a very militarized foreign policy. The first thought when we run into a problem abroad is, sanctions, which is coercive, a form of war, an economic war; then we send in the Marines, or if the Marines aren’t available, the Army or somebody. This is our mentality, and it comes out of our history, I suppose. You are very rational; that is exactly what I think we should be doing, that is, we should accept that there is no military answer that is acceptable to the Taiwan question, either for China, or for us. We need to find a way to take it off the track that it is now on toward a fight. I don’t know about you, but at the moment, Americans have no consensus on what the past means; our founding myths are all being deconstructed, our heroes are being toppled from their pedestals. New heroes are not really being invented that appeal to everyone. We are more divided than ever. We don’t agree on what the present is; we have no common vision of the future. And if you doubt that, look at Washington DC at the present. What Ed said, China has a clear ambition and a strategy for achieving it. We are countering it with fumbling and internal division, and a focus on military uses of force.

Lyle Goldstein: I think this is a very wise question, and for those of you not familiar with 17th- Century European diplomacy, this term, the Westphalian model, is something we really ought to get back to, and I think it is generally studied in international relations classes, but I don’t think it’s known beyond that, but I’m glad you brought it up. I do think it’s absolutely critical to a way forward with China. All it is, is a basic principle, countries can be different, probably should be different, they shouldn’t interfere in each other’s affairs, and this eventually stopped the incredible warring that was going on between various Catholic and Protestant states in Central Europe. It’s very applicable to today, that most diplomats agree with these basic principles, but it seems to me, I’m not sure why this is completely broken down in the modern discourse in international politics. I have a feeling it has something to do with Twitter and journalism and Cable News, and all this, and kind of democracy run amok. I think George Kennan and people like that would certainly favor returning to the old ways, to this understanding that it is quite normal that countries are run in very different ways, and to resist the temptation to constantly be telling other countries how to run their affairs.