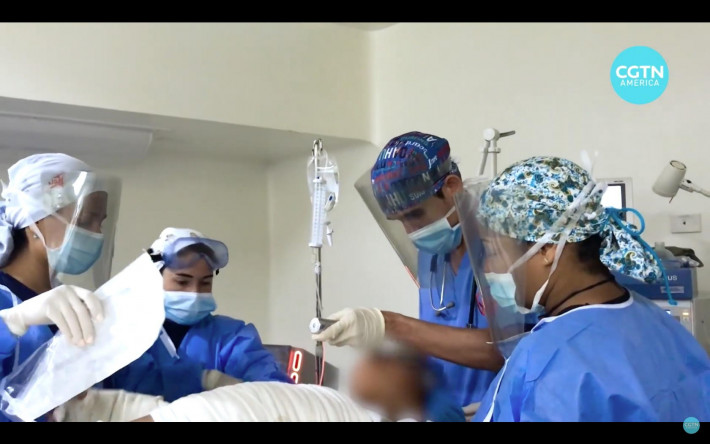 April 17, 2021by madeleine in General, Healthcare

Venezuela has finally been able to make the down payment required for developing countries to begin to receive their allocations of COVID-19 vaccines from the international COVAX facility, Vice President Delcy Rodríguez announced on April 9. But Rodriguez reported that the government was only able to do so through elaborate maneuvers to secure Swiss francs for the purchase. President Nicolas Maduro explained the next day, that Venezuela could only do this by “liberating some resources which had been kidnapped by the U.S. and deposited in Swiss francs, because if it had been done in dollars, the U.S. Federal Reserve would have stolen it.”

That Venezuela was forced to go through such maneuvers to be able to purchase vaccines, exposes the lie by successive United States administrations, that U.S. economic sanctions do not affect humanitarian aid or the people of the dozens of nations on which sanctions have been imposed. Neither the President or Vice President gave any details, but Maduro said “at the right time,” people will find out how they had freed up a tiny portion of the country’s own reserves to make the needed payment to COVAX. (The 59.2 million Swiss francs paid equal a little over half of the $120 million cost of nearly 11.4 million vaccine doses.)

Led by Mike Pompeo and John Bolton, the Trump administration enacted sanctions against Venezuela which are nothing less than an economic blockade, a blockade which Biden’s Secretary of State Tony Blinken has reaffirmed. Under the sanctions, Venezuela’s foreign reserves held abroad have been seized by the Federal Reserve, Bank of England, and other banks. At the same time, Venezuela is prohibited from selling its oil on international markets—a measure enforced by U.S. navy gunboats as well as legal threats—thus shutting down its primary means of earning new dollars to cover vital imports, including food, medicines—and vaccines.

President Nicolas Maduro reported on April 10th that a great diplomatic and legal effort had been required to access enough of Venezuelan government funds which had been “kidnapped by the Federal Reserve” under the “criminal financial sanctions” to make the payment. The Biden administration had refused the government’s appeal for some of its frozen reserves to be released for the Venezuelan government to purchase vaccines, driving Maduro to even offer “oil for vaccines” on March 29—although, that, too, would be “illegal” under U.S. sanctions.

Venezuela is one of the South American countries where the coronavirus is surging right now, and particularly the Brazilian variant, yet until now, the only vaccine commitments the government has been able to line up were for Russia’s Sputnik V and EpivacCorona (for which payment arrangements were made), China’s Sinopharm (donated), and Cuba’s yet-to-be approved Abdala.