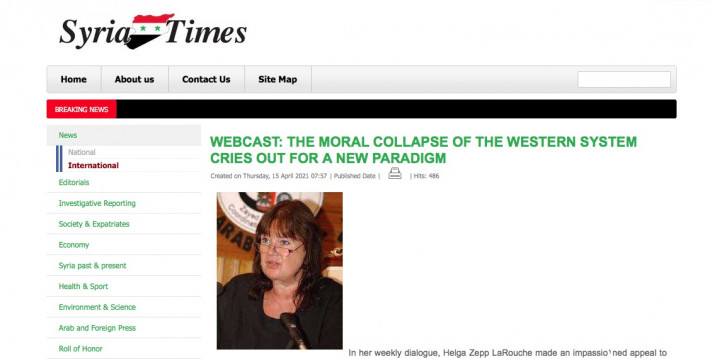 The-moral-collapse-of-the-western-system-cries-out-for-a-new-paradigm The article is accompanied by two pictures, one of Helga and the other of Cardinal Zenari. The full text follows:

“In her weekly dialogue, Helga Zepp-LaRouche made an impassioned appeal to viewers to join with her in addressing the dangerous moral collapse which characterizes virtually every western government, including the United States. This collapse poses a threat to everyone, as the crisis in Ukraine continues to build toward a war between Russia and the forces of the U.S. and NATO. The possibility of a Biden-Putin summit is a positive development, but at the same time it was announced, his foreign policy team was voicing full support for the fanatical extremist wing of domestic forces in Ukraine, which is pushing to cross the “red line” announced years ago by Moscow, that of placing NATO troops on the Russian border of Ukraine.

“She also emphasized the urgency of lifting the so-called Caesar Sanctions against the people of Syria, citing the appeal of Cardinal Zenari to end the sanctions. There is nothing “humanitarian”, she stated, in starving children and shutting down hospitals and medical care, based on another fraudulent narrative cooked up by U.K.-U.S. regime-change networks. We must insist that every policy maker who does not speak up against this fraud is complicit in every death which occurs in Syria, and in Yemen.”