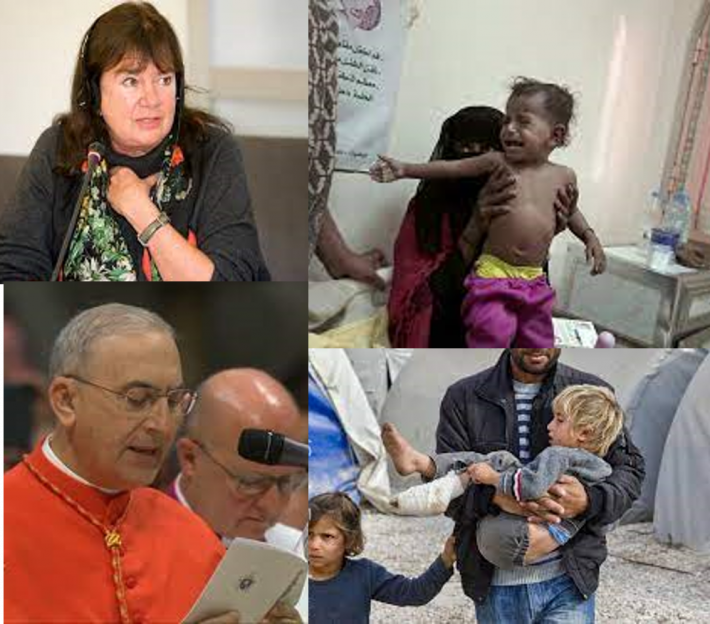 April 15 — The Schiller Institute is circulating an urgent response from its founder Helga Zepp-LaRouche to Apostolic Nuncio to Syria Cardinal Mario Zenari, who has alerted the world to the acute humanitarian emergency that has been deliberately imposed upon Syria, in the aftermath of nine years of war, through murderous “sanctions” measures imposed by the U.S. State Department and irresponsibly supported by a number of other governments, most emphatically the British. Action to end the so-called “Caesar Sanctions” imposed upon Syria will not only help halt the mass starvation and poverty now engulfing that nation, but will also benefit the rest of humanity. It is time to pursue, as the Cardinal states, a pathway of Peace through Development, and to reject outright the moral indifference which increasingly threatens to unleash this scale of calamity throughout the planet.

In her weekly Schiller Institute webcast discussion on April 14, Zepp-LaRouche demanded that the world come to the aid of the Syrian people. As Cardinal Zenari has stated, more than 90% of Syrians are below the level of extreme poverty, and many are in danger of losing their lives due to famine. The last decade of war, the unjust sanctions, and the COVID-19 pandemic have created an absolutely intolerable condition of suffering for the Syrian people.

Similar horrors confront Yemen, where the agonizing reality of hunger is conveyed in the powerful documentary, “Hunger Ward,” referred to by the head of the World Food Program, David Beasley, who saw children dying before his very eyes in the hospital, and he was unable to help.

There is nothing “humanitarian” Zepp-LaRouche stated, in starving children and shutting down hospitals and medical care, based on fraudulent narratives cooked up by British and American regime-change advocates, in and out of government. “This must stop and the Caesar Sanctions must be lifted. And all the members of the U.S. Congress who do not lift these sanctions make themselves complicit in every death that occurs in the region.”

Zepp-LaRouche continued: “This has reached the point where either the world wakes up and we start to remedy this, or we will not survive, because of our own moral failure as a human species. I call on you: Work with the Schiller Institute. Work with its Committee on the Coincidence of Opposites, which is working to get aid programs and reconstruction. I appeal to you: Get in contact with the Schiller Institute and respond to the call by Cardinal Zenari.”

This appeal is distributed in Portuguese, Arabic, German, Danish, Italian and Spanish, among others.

Cardinal Zenari: “Time is running out,” to end the sanctions against Syria