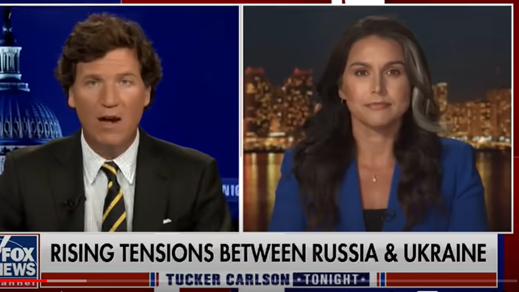 Apr. 14 (EIRNS)–Appearing on Tucker Carlson’s show on Monday, former member of congress and presidential candidate Tulsi Gabbard warned the American people of the existential threat of conflict with Russia: “[The situation with Russia and Ukraine] is moving in a very dangerous direction. The question for the American people is, ‘are we willing to go to war with Russia on behalf of Ukraine’? And we need to understand that such a war would come at a cost beyond anything that we can really imagine. Because this is not a war that’s happening to someone else, somewhere else on the other side of the world. No, this is something that will directly impact me, and you, Tucker, every single one of your viewers, and all of our loved ones.

“And this is a war that is not a game. It’s a war in which there are no winners, because you’ve got thousands of nuclear weapons that the U.S. has aimed towards Russia; Russia has thousands of nuclear weapons that are aimed towards us, that could hit any town or city in the U.S. in less than thirty minutes, that could exact a cost on every one of us that would result in excruciating death and suffering beyond comprehension — hundreds of millions of people dying and suffering seeing their flesh burned from their bones. This is something that you can’t really even imagine. And it’s a cost that we will {all} pay.”

In response to Carlson’s question, “why in the world would we ever contemplate going to war with Russia, honestly?” Gabbard continued:

“It is one that we should not do, for those very reasons. You look at the impacts of what a nuclear brings. It brings about the end of the world as we know it. And our leaders should understand this consequence and take it seriously. This is why President Biden, instead of continuing to escalate tensions and escalate this new cold war between the United States and Russia, he needs to de-escalate these tensions, to take the heat out of it, and bring an end to this new cold war. Because if he doesn’t, it’s not a question of {if} we go to war with Russia, {if} this war goes to a nuclear holocaust: it really is then just a question of {when}. And if we continue down this path that we are on, it’s something that could happen a lot sooner than any of us think.”

Carlson concluded by referring to how he had opened the segment, by contrasting the importance of Gabbard’s warning to the war over pronouns: “I’m just amazed by the magnitude of the stories that all of us are missing, including those of us who are paid to follow this stuff, and especially this story. So, I appreciate how you so crisply and wisely addressed that. It’s terrifying.” Watch the interview here.