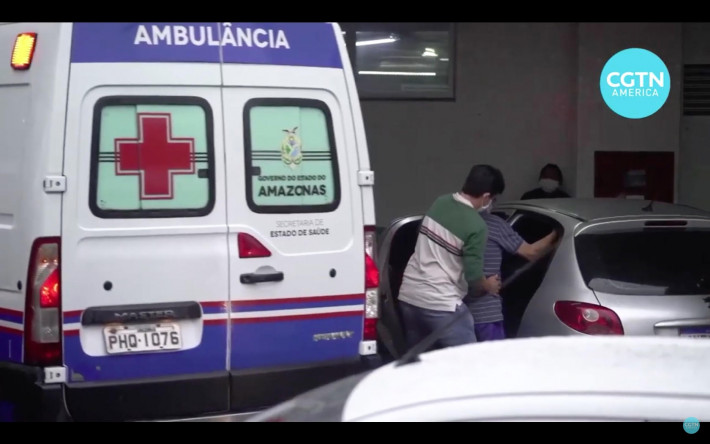 March 28 (EIRNS) – Numerous Brazilian medical and other authorities are sounding the alarm that the COVID pandemic in Brazil is careening out of the control, threatening not only the country but the entire planet. At present, one in every four COVID deaths worldwide is occurring in Brazil. “Before, the risk factor to dying from Covid-19 was being older, having some co-morbidity,” said Domingos Alves, a professor of medicine who’s part of a national monitoring group. “Now, the risk is being Brazilian,” Bloomberg reported.

The mortality rate in Brazil has risen from 2% at the end of last year to 3.1% in mid March, according to Fiocruz, one of the country’s leading R&D centers in epidemiology. That is more than a 50% increase in less than three months. Only 7% of the population have received a vaccine shot; 2% are fully vaccinated. More than 300,000 Brazilians have died of Covid to date; some experts expect the half-million mark to be hit by June, and for Brazil to surpass the U.S. in deaths by the end of the year – a grim achievement.

An alarming new trend is a sharp rise in the number and proportion of younger Brazilians who are getting sick and dying from Covid – this in a country that is largely young. According to official statistics, from Jan. 1 to mid March the rate of new cases among those aged 30 to 59 rose by nearly twice the national average of 316%. Deaths in those age groups jumped by at least 317%, compared with 223% for Brazil as a whole.

Scientists are still trying to figure out why that is happening. One theory is that younger patients wait longer to seek health care and are sicker when they arrive at the hospital. Another factor may relate to the new variants appearing in Brazil. Bloomberg cited Jaques Sztajnbok, who helps run the ICU at Sao Paulo’s Emílio Ribas hospital, one of Brazil’s main facilities for infectious diseases, saying that patients are largely getting sick with the variant that first appeared in the Amazonian city of Manaus or the U.K. one, both of which are more contagious than the original strain.

“Fernando Brum, a director at Sorocaba’s Santa Casa hospital [near Sao Paulo], said the mutation of the virus into a much more contagious version with a viral load that makes people sick in a faster and more aggressive way has meant young people have gone from mostly asymptomatic cases to being gravely affected… `The intensive care unit is constantly and uninterruptedly occupied,’ he [Brum] said. Patients in their 30s make up at least half of those beds, and their average time spent in the hospital has tripled from last year. It has come down recently for a grim reason — patients are dying more quickly.”

The country’s health system is on the brink of total collapse. Miguel Nicolelis, professor of Neurobiology at Duke University who advised several Brazilian governors and mayors on pandemic control, told AP: “We have surpassed levels never imagined for a country with a public health care system, a history of efficient immunization campaigns and health workers who are second to none in the world. The next stage is the health system collapse.”

Brazil’s state-run science and technology institute, Fiocruz, on Tuesday called for a 14-day lockdown to reduce transmission by 40%. “We need to open our eyes and understand this is no joke,” Rio’s Mayor Eduardo Paes said in a recorded message on the eve of a 10-day shutdown in that city. “People are dying and, if everything continues as is, nothing is done, God only knows what could happen. No one knows this disease’s limit. No one knows how many variants could emerge.”