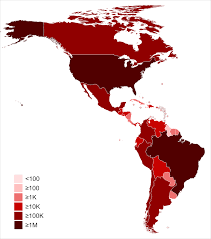 March 25 (EIRNS) — Dr. Pedro Hallal, an epidemiologist and Dean at the Federal University of Pelotas in southern Brazil, stated that “Brazil now represents a threat to global public health” that must be urgently addressed by international action. Hallal is the coordinator of Epicovid-19, the largest epidemiological study into the coronavirus in Brazil. Hallal stated that the pandemic is out of control in Brazil, which is now a breeding ground for dangerous new variants. “The virus is circulating so widely in Brazil that it is possible, and I would say likely, that new variants will appear in the near future. We need to stop that urgently,” he said.

Hallal called for an international task force to address the crisis, since the policies of the Brazilian government of Jair Bolsonaro have brought the country to the brink of collapse. If not, “global efforts to control COVID-19 will be jeopardized,” he said.

An open letter from hundreds of leading financial figures in Brazil, including former ministers and five former presidents of Brazil’s Central Bank, also slammed Bolsonaro’s COVID policy and demanded urgent change. Without ever mentioning Bolsonaro by name, the letter is clear, attacking Brazil’s “top political leadership” which displays “a disdain for science, looks to remedies without evidence of their effectiveness, encourages crowds, and flirts with the anti-vax movement.” They demand a nationally coordinated policy of social distancing, including a national lockdown if necessary.

Bolsonaro is feeling the heat, and has reluctantly agreed to meet with Brazil’s governors – who universally oppose his do-nothing policy and have tried to impose state-by-state measures – and has even promised to start a serious vaccination campaign (so far, less than 7% of Brazilians have had one dose of a vaccine). In over half of the country’s 26 states, the rate of occupancy in ICUs tops 90%. Last Tuesday, daily deaths in the country topped 3,000 for the first time, with 3,251 deaths recorded. Brazil now accounts for one out of every four deaths worldwide from COVID. The biomedical research institution Fiocruz, a week ago reported that Brazil’s public health systems are “living through the worst collapse in history.”

“The situation is very, very concerning,” said Tedros Adhanom Ghebreyesus, director-general of the World Health Organization. “Brazil has to take it seriously.” Dr. Hallal stated: “If we do not have enough vaccines in the next 30 to 45 days, the situation will be terrible — not only for Brazil, but for the rest of the world.”