NATO Must Be Dissolved 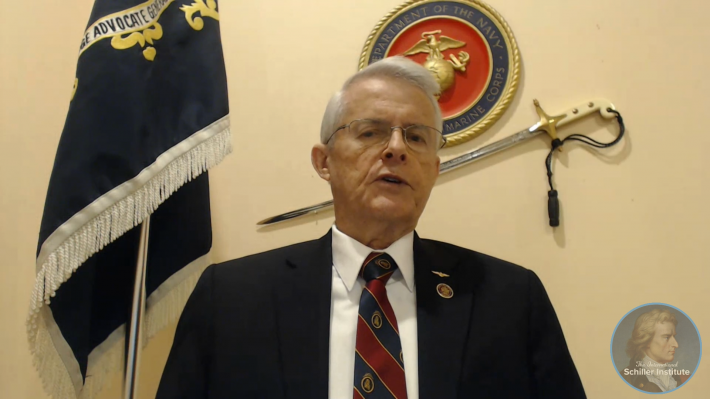 NATO Must Be Dissolved

December 15, 2020by David Dobrodt in General

SEN. RICHARD BLACK: I’m very pleased to be here with Schiller
Institute, and I want you to just know in advance that I come at this as a
very patriotic American. I’ve risked my life hundreds of times in combat.
So I’m very patriotic but I’ve very concerned about NATO.
NATO, in my view poses a very grave threat to world peace. In fact, it
is the centerpiece of the deep state. Going back, in 1949, NATO was
formed as a defensive alliance against the Soviet Union, which was
massively powered by nuclear weapons. The Soviet Union, in response
formed the Warsaw Pact, six years later in 1955. Many years of Cold War
went on. Fortunately, there was no nuclear war, or conventional war. The
Cold War ended in 1991, when the Soviet Union dissolved and communism
was discredited. The Warsaw Pact dissolved that same year.
Now, by 1991, NATO served no practical purpose, and it should have
been dissolved. It would have been a great thing for world peace had it
been dissolved. The prospects for a permanent peace were very bright.
The distance between Germany and Russia was over 3,000 miles, a huge
buffer against any sort of an accidental missile launch, or a hostile invasion,
one way or the other. So at that point, the prospects of a World War III
were extremely remote and this was a very fine time.
Backing up just a year before that, in 1990, President George H.W.
Bush and the top brass from NATO guaranteed President Gorbachev of the
Soviet Union that if he would not interfere with the reunification of
Germany, that NATO would not move one inch to the east, towards Russia,
and he accepted that agreement, and carried it out loyally. But, NATO lied,
and they lied massively. Instead of observing their promise, NATO rapidly
advanced, until today, they lie within 20 miles of the Russian border. So
NATO has advanced the same distance, approximately, as from coast to
coast in the United States, from New York City to San Francisco.
Instead of dissolving NATO, the Alliance grew from 16 members, to
30 members, and they did this by falsely portraying Russia as the
reincarnation of the Soviet Union — which it was not, at all.
Now, it’s important to realize that Russia’s population is half that of
the United States, and its economy is only the size of Italy’s. A good
measure of the genuine risk from Russia, is that Germany, which is the
industrial powerhouse of Europe, assessed the threat of Russian invasion
as so remote that they have reduced the number of tanks from 5,000
during the Cold War, down to 200 today, almost nothing.

Now, Donald Trump campaigned on withdrawing from NATO,
because it was obsolete, and he made a pledge to normalize relations with
both Russia, with Syria; however, the problem with this is that it would have
destroyed the {raison d’être}, the very reason for the existence of NATO
and the deep state. And it is that principal reason, in my opinion, that
caused President Trump to face a continuing coup, that began before he
was elected and that culminated in the massive election fraud that we have
just seen.
The Russian hoax put President Trump’s back at the wall. He was
forced to modify his anti-NATO rhetoric and sort of morph it into a demand
that NATO simply purchase more weapons. They’ve done this, and of
course, this has only further exacerbated the arms race between NATO
and Russia.
NATO and the military-industrial complex, the entire deep state,
employing millions of influential bureaucrats, they depend upon public
perceptions of nonexistent threats for their existence. There are millions of
defense-related jobs that are involved in this. But the fact is, that except for
minor border skirmishes with Mexico, the United States has never been
invaded by a foreign nation since the War of 1812. Back then, we were a
small, weak nation, and today, we are now the monolith of the world. The
U.S. defense budget is so large that it’s now larger than the 10 largest
defense budgets of other nations. We have three times the budget of
China; fifteen times the budget of Russia; and forty times the budget of
Iran. The U.S. Navy has three times the naval tonnage of either Russia or
China. Their navies are primitive: While we have 11 massive carrier task
forces to project global power, both China and Russia have only one,
modest aircraft carrier apiece.
Marine troops, naval infantry, are a measure of a nation’s power to
invade other countries from the sea. The U.S. has 15 times as many naval
troops as Russia and 8 times as many as China. So anyone who imagines
that perhaps we’re threatened by some sort of an invasion, need only look
at the size of the U.S. Marine Corps, and the size of their marine forces and
realize that that is a fantasy.
With the U.S. in the lead, NATO has taken recklessly provocative
actions against Russia, to deliberately heighten the tensions, we repeatedly
fly nuclear capable missions directed towards the border of Russia, and
just before they reach the border of Russia, they peel off and go off in their
directions. But just in the month of August, it forced Russia to scramble
jets to intercept these bombers on 27 different occasions.

The provocations, both naval and by air, have become so militant and
so risky, that in 2019, President Putin made the decision to unveil his
previously secret hypersonic nuclear weapons program. He did this, not to
bluster and impress the world, but he did this to ward off any possible
offensive action towards Russia. He’s followed that up by announcing that
he’s going to arm the Russian Navy and Russian submarine force with
hypersonic missiles.
With virtually no buffer between NATO and Russia, these missiles,
which cannot be intercepted, are able to reach Washington, D.C., or New
York City from Russia, within an hour, and for missiles that are fired by
Russian submarines offshore, within several minutes they can literally
exterminate the entire population of Washington, D.C., or of New York City.
This is an extraordinary danger to the American people.
One thing we need to understand: {Russia does not want war.} They
don’t want a nuclear war, certainly. And they cannot fight the United States
and NATO conventionally. But the U.S. has dismantled all of the nuclear —
almost all of the nuclear disarmament treaties. They were painfully
negotiated over decades, and now we are developing small-yield nuclear
weapons whose only purpose is to make nuclear war a more practical
reality.
So, NATO, which once defended Europe, is now fighting aggressive
wars in the Middle East and they’re being recruited to confront China and to
join in on that venture, which is very likely to occur. Each of these
expansions of NATO raise the specter of a nuclear war. If World War III
breaks out, it will kill vast numbers of American citizens, and NATO will be
to blame. The death toll will exceed any war that has ever been fought by
many, many times! It would poison the Earth with radiation. It would cause
a total breakdown in trade, transportation, and food production. It possibly
would end civilization, altogether.
Now, it’s important for Americans to understand the geography of the
world. The United States was blessed by having massive oceans on either
coast: the Pacific, the Atlantic, that extend for many thousands of miles. So
we are not threatened. No nation can invade the United States, and unless
we threaten others, there is absolutely no realistic fear of war. Ordinary
Americans gain nothing by the endless wars that we’re fighting, under the
aegis of NATO and our allies. And it’s important to realize that when the
balloon goes up, top government officials and the global oligarchs will
shelter in prepared underground cities. But the rest of us will be
incinerated by their folly. We will have NATO to thank for the demise of
Western civilization.

Thank you very much.