Putin at G20 Summit: The World Is Facing a Systemic Economic Crisis… Not Known Since the Great Depression 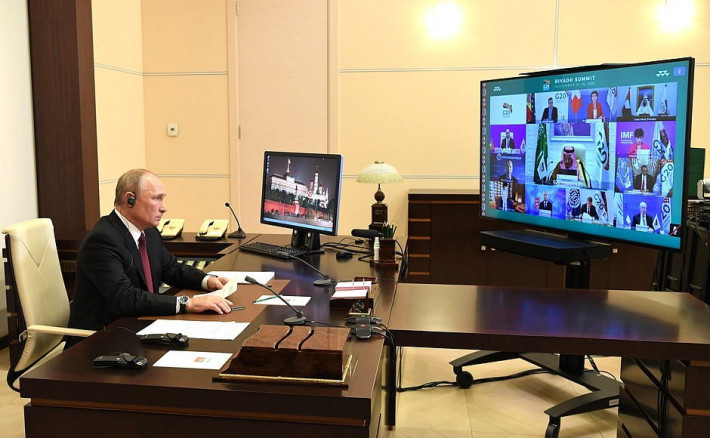 Putin at G20 Summit: The World Is Facing a Systemic Economic Crisis… Not Known Since the Great Depression

November 24, 2020by David Dobrodt in General

In remarks delivered yesterday to the summit of G20 heads of state, Russian President Vladimir Putin used his opening words to paint a stark and sobering picture of the crisis facing mankind. “The scope of problems humanity has faced in 2020 is truly unprecedented. The coronavirus pandemic, global lockdown and frozen economic activity have launched a systemic economic crisis the world probably has not known since the Great Depression,” Putin began. “The growth of national economies has been severely undermined. The pandemic claimed dozens, hundreds of thousands of lives while millions of people have lost their jobs and incomes. The main risk, obviously, even despite some positive signals, the main risk remains: mass long-term unemployment, a so-called ‘stagnant’ unemployment with the subsequent growth of poverty and social insecurity. The role of the G20 is to stop this from happening.”

Putin noted that nations around the world had provided “packages of incentives for the world economy totaling $12 trillion” to address the crisis. “The U.S. President has spoken now about the U.S. efforts — indeed, it is a very big contribution to the recovery of the American economy, which also means the recovery of the world economy.” But none of this is sufficient to address the magnitude of the crisis we face.

“We are aware that the developing economies and some emerging market economies objectively lack such resources [to mitigate the crisis]. Their fiscal revenues have plunged while the need to allocate considerable funds for fighting the pandemic is growing practically daily. National currency devaluation carries a big risk, and respectively, the cost of servicing on the state debt, primarily for low-income countries, which have two-thirds of their loans in U.S. dollars.”

He supported the G20 decision made in April 2020 to “install a temporary moratorium on developing nations’ debt payments. That is certainly a much-needed initiative, but it only covers the poorest countries. It does not include their debt to private creditors and concerns less than 4% of the developing countries’ overall costs of servicing state debt in the current year. I believe additional measures are needed to prevent the deterioration of the situation and the growth of economic and social inequality.”

Putin did not present a comprehensive policy to reverse the systemic crisis he had accurately described. He instead focused on aspects of the fight against the pandemic that Russia and other nations are undertaking.

“Undoubtedly, immunization drugs are and must be universal public domain. Our country, Russia, is ready to provide the countries in need with the vaccines developed by our researchers. This is the world’s first registered vaccine Sputnik V, based on human adenoviral vectors platform. The second Russian vaccine, EpiVacCorona from a Novosibirsk research center, is also ready. The third Russian vaccine is coming.

“The scale of the pandemic compels us to engage all the resources and research available. Our common goal is to form portfolios of vaccines and ensure reliable protection for the planet’s population. It means that there will be enough work for everyone, colleagues, and I think it is a case when competition may be inevitable but we must proceed primarily from humanitarian considerations and make it a priority.”

He concluded: “This crisis must become an opportunity to alter the trajectory of global development.”

The text of his speech is posted to the President’s website.