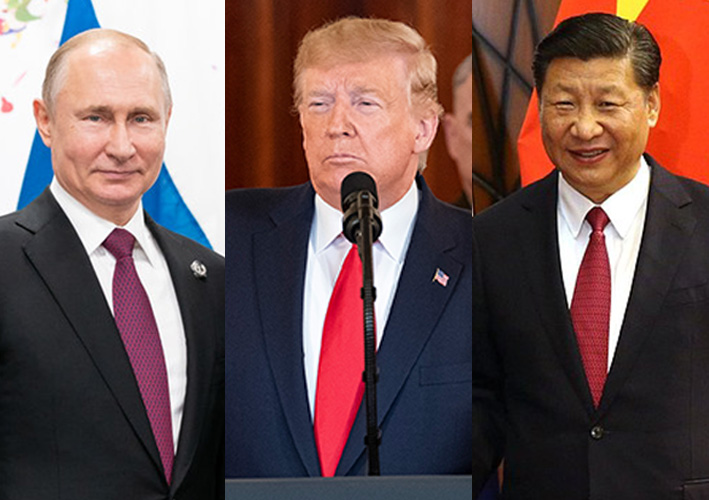 If the world is to escape a spiral of retaliations and counter-retaliations in the wake of the the killing of Iranian Major General Qasem Soleimani and Iraqi Popular Mobilization Units Deputy Commander Abu Mahdi al-Muhandis , the Presidents of the United States, Russia and China must convene an emergency summit to address the current crisis in Southwest Asia and the solutions to that crisis.

Seventy-five years ago, the United States, Russia and China were joined together in the global fight which defeated fascism, and today, these Presidents must act in concert to save the peace.

“It is clear, that among the three presidents, President Trump—who promised to end the endless wars and has already taken several steps in that direction—and Presidents Putin and Xi, there is the intention and the capability to outflank the maneuvers of the war-mongers and to establish a higher level of cooperation. That potential is the reason that the coup—Russiagate and now the Impeachment—are orchestrated against Trump. It is now the time for those three outstanding leaders to fulfill the potential that historical providence has bestowed upon them.”

Every world war and major war of the past century has been triggered by the British Empire’s geopolitical policy of permanent warfare, throwing nations against each other to maintain their power as a global elite.

Nowhere have the effects of that evil imperial policy of pitting nations, peoples, religions and factions against each other been more evident than in the Mideast, where that policy was codified by the Sykes-Picot Treaty established by the British and French imperial powers after World War I.

Understanding that history, Lyndon LaRouche, in a speech delivered 15 years ago, provided the framework in which to understand and act on today’s crisis.

“And when you look at the possibilities for this region, like Southwest Asia, the only chance will come, not from inside Southwest Asia. We will do, and must do, what we can, for that area, to try to stop the bloodshed, the agony, to prevent the war. But we will not succeed, until we change the history, change the world in which this region is contained.”

Therefore, we call on President Trump to meet with Presidents Putin and Xi to not only address the immediate danger of war in Southwest Asia, but to do so with permanent effect by creating a New Paradigm for the world—to change the world, as LaRouche said.

Such a paradigm must be based on the principles of the Treaty of Westphalia, which ended the Thirty Years War in Europe. Warring nations broke the cycle of retribution and revenge and acted for the “advantage of the other.”

Such a paradigm must end geopolitics and imperialism, and establish a new financial and strategic architecture for the world, based on defense of the sovereignty and cultural integrity of all nations.

The U.S., China, Russia and other nations such as India, must act to establish a joint plan for the economic development of the entire region, informed by policies put forward by Lyndon LaRouche and Helga Zepp-LaRouche over the decades, and now given life by China’s Belt and Road Initiative.

Such a policy will realize LaRouche’s vision: “There is a solution, a solution in principle. And the solution is: End this blasted imperialist system! And understand that we, as a people, must develop our spiritual culture; that is, the creative powers of mankind, to carry further the development of mankind.”

A PDF of this call to action can be found here.