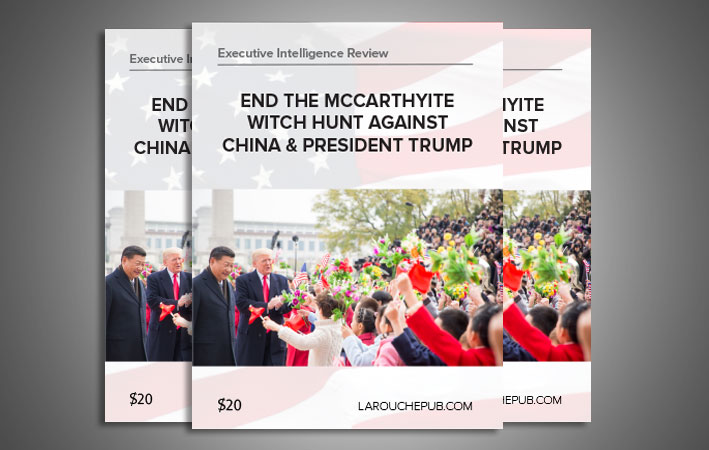 A new report released Nov. 22 by EIR exposes the fact that the same people running the attempted coup against President Donald Trump, both the Russiagate hoax and the phony impeachment hearings, are behind the anti-China hysteria in the U.S., and for the same reason: to sabotage President Trump’s absolute commitment to be friends with both China and Russia in order to end the British Imperial effort to provoke a military confrontation between the US and Russia and China.

The Executive Intelligence Review’s 24-page pamphlet, “End the McCarthyite Witch Hunt Against China and President Trump,” includes an introduction by Helga Zepp-LaRouche, President of the Schiller Institute, who is known in China as the “Silk Road Lady.” Zepp-LaRouche reviews the phenomenal development within China since the “reform and opening up” under Deng Xiaoping, which is now close to reaching the goal of fully eliminating poverty in China. She demonstrates that President Xi Jinping’s New Silk Road, the Belt and Road Initiative, is a new paradigm for cooperation of all nations on Earth, extending China’s historic internal transformation into an infrastructure-based policy to finally bring real development to the formerly colonized nations of the world.

The pamphlet exposes the vile, racist campaign, lead by FBI Director Christopher Wray, to accuse every Chinese person working or studying in the United States —and even leading American scientists of Chinese descent—as potential spies who must be investigated. Universities and scientific institutions have been ordered to spy on their Chinese and Chinese-American employees or face losing federal funding for their programs. The project has driven leading cancer and Parkinson’s disease researchers out of their jobs, while terrorizing people of Chinese descent across America.

Another chapter exposes the perverse Falun Gong cult as a front for the war hawks in the “Committee on the Present Danger—China,” led by Stephen Bannon, to induce Trump supporters to swallow the McCarthyite lie that China is out to take over the world and impose anti-American communist dictatorships worldwide. Another chapter documents the transformation taking place cross Africa and South and Central America through the Belt and Road Initiative, where, for the first time in history, the formerly colonized nations have a reason to be hopeful that they can escape from poverty, as China has, through vast infrastructure projects—precisely the infrastructure denied them by the IMF-dictated “appropriate technologies” myth. America, too, would benefit greatly if President Trump can establish collaboration with China to help rebuild the rotting infrastructure in the United States.

The pamphlet also demonstrates that U.S. relations with China over the past century and more have always been in direct confrontation with British colonialism, as Presidents Abraham Lincoln and Ulysses Grant fought to use American System methods of infrastructure building to counter the British opium trade and colonial looting of Asia. China’s Republican Founding Father Sun Yat Sen was a proud sponsor of the Hamiltonian “American System” against British colonialism, and China’s President Xi Jinping today is driving exactly such a policy to build modern industrial nations based on sovereignty and development. That fight for the American System over British imperial policies continues today, and will be advanced by President Trump’s efforts to resolve the trade issues and establish friendly relations with Beijing.

This intervention by the LaRouche movement comes at a moment of great danger, with the western financial system beginning to unravel, and British and American geopoliticians trying to provoke military confrontations with China and Russia. Nearly the entire U.S. Congress and all the mainstream media are lying that Xi Jinping is a vicious dictator, oppressing his people, denying their right to practice religion, and using the Belt and Road as an imperial trick to take over the world. The fact that many, perhaps a majority, of the American and European populations accept this “big lie,” is an existential danger to the future of civilization. A war with China, and/or Russia, would mean the end of civilization as we know it.

The pamphlet quotes a presentation by the late statesman and economist Lyndon LaRouche, from a speech in 1997, while the former Soviet Union was being dismembered by western bankers and carpetbaggers. Even then, Mr. LaRouche insisted on the urgent and special role of the US-China relationship. He said:

“Now, there’s only one other power on this planet, which can be so insolent as that, toward other powers, and that’s the [peoples] Republic of China. Now, China is engaged, presently, in a great infrastructure-building project, in which my wife and others have had an ongoing engagement over some years. There’s a great reform in China, which is a troubled reform. They’re trying to solve a problem; that doesn’t mean there is no problem. But they’re trying to solve it. Therefore, if the United States, the President of the United States, and China, participate in fostering that project, sometimes called the Silk Road Project, sometimes the Land-Bridge Project—if that project of developing development corridors, across Eurasia, into Africa, into North America, is extended, that project is enough work, to put this whole planet, into an economic revival.”

It is a moment of tremendous potential for a new paradigm for human progress. The LaRouche program calls for the great powers—China, Russia, India and the United States—to establish a New Bretton Woods system for universal human development. This is now within reach. The defense of President Trump against the ongoing attempted coup, together with America joining in the spirit of the New Silk Road, are both urgent and feasible—and the alternative is unthinkable.