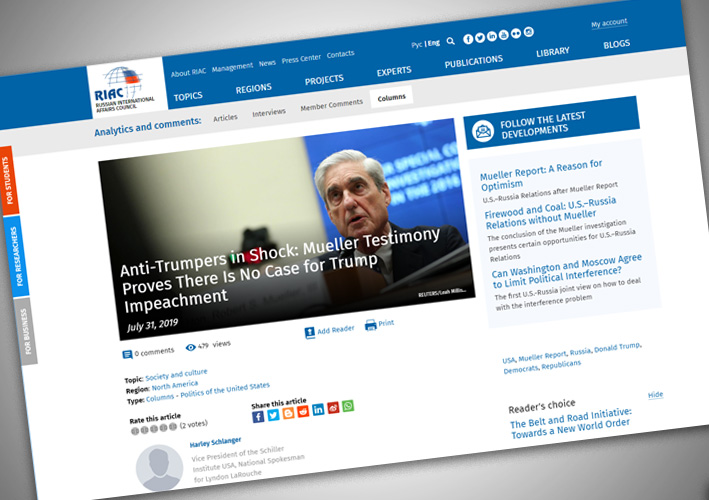 “Mueller’s failed effort to provide a “smoking gun” proving Trump’s “collusion” or “obstruction” in his 448-page report, and then again in his testimony, was summed up in a simple, unambiguous statement during the nearly-seven hour hearing, when he said that his prosecutorial team “did not reach a determination as to whether the President committed a crime.” However, this will not stop fanatics such as Schiff and Nadler from continuing to beat the drums for impeachment, as Russiagate has never really been about Trump or his campaign committing impeachable acts. The underlying issue, which was not addressed by those Republicans at the hearings who were defending Trump [1] is his commitment to break from the post-Cold War unilateralist paradigm, which under his predecessors G.W. Bush and B. Obama, escalated a geopolitical divide between the U.S., and Russia and China. Trump repeatedly stated, during the campaign and as President, that he wished to develop mutually beneficial, cooperative relations with Russia and China, as part of his effort to pull the U.S. back from its role as being the policeman of the world. We must end American involvement in endless wars, he said, wars which have been costly in both monetary terms and loss of life, and which have been pursued without serving any underlying national security interest.

“It was this commitment, to end these regime change wars, combined with his opposition to such “globalist” policies as neoliberal free trade agreements and the Paris Climate Accord, which paved the way for his election victory over Hillary Clinton, who adamantly favored a continuation of the Bush-Obama strategic direction. Unable to combat Trump on these matters, the British intervened as the actual “meddlers” in the U.S. campaign, inventing the story of Russian intervention on behalf of Trump. The British role in initiating the fraudulent narrative of Russian intervention, and the collaboration between British intelligence – including a direct role played by GCHQ, the equivalent of the U.S. National Security Agency, and MI6 – with top officials of the Obama administration intelligence team, led to the convening of a “Get Trump” task force during the campaign, with former CIA Director Brennan and National Security Adviser Clapper playing leading roles.

“After his election, as Trump initiated steps to break with the unilateralist military/strategic geopolitical doctrine, in his early, successful meetings with Russian President Putin and China’s President Xi, the coup plotters went into overdrive. Shortly after Trump fired FBI Director James Comey, on May 9, 2017, Mueller was appointed a special counsel to investigate the fake story, on May 17, 2017. From that point, until the release of Mueller’s report on March 22, 2019, every effort made by Trump to proceed with improving relations with Putin and Xi was characterized as evidence that he was acting under a blackmail threat from Putin, a charge stemming from the faked and now-discredited dossier compiled by “ex”-MI6 spy Christopher Steele.

“As was made clear by Mueller’s statement that he was “not familiar” with Fusion GPS, which paid Steele with funds from Perkins Coie, the law firm representing the Clinton campaign, it is this connection, between Hillary’s campaign, Obama’s intelligence team, and the highest levels of British intelligence, that those behind Mueller wish to keep out of public view. In saying this, Mueller was either lying, in which case he could be charged with lying to Congress – a tactic he used in targeting Trump friend Roger Stone – or he exposed the fact that he was a mere front man for those who ran the investigation, and wrote the report. In either case, it is further evidence of the fraud employed by the Get Trump team.

“It is precisely the nexus behind this fraud which is now under investigation. Attorney General Barr’s appointment of respected U.S. Attorney from Connecticut, John Durham, and the expected imminent release of an investigation conducted by Justice Department Inspector General Horowitz, into the use of the Steele dossier in the filing for a warrant before the FISA court to “spy on” the Trump campaign, has truly spooked the coup plotters. What Trump has called the “greatest political scandal in U.S. history” will be exposed, and many of the key players are fearful that they now face prison for their crimes.”