Trump on N. Korea Deal — “We’re not looking for speed, we’re looking to get it right.” 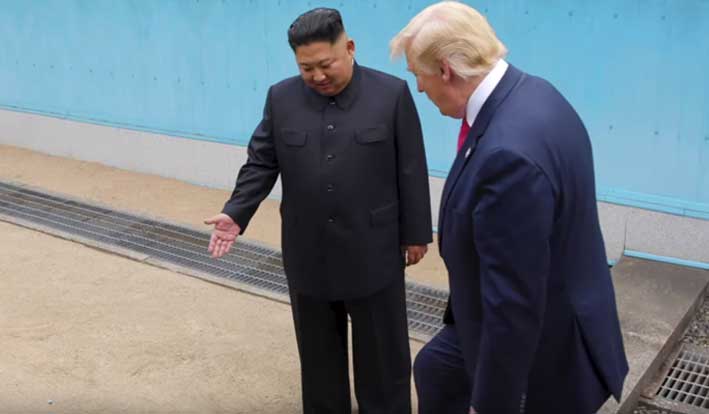 Trump on N. Korea Deal — “We’re not looking for speed, we’re looking to get it right.”

Following a 50-minute meeting with the North Korea’s Chairman Kim Jong Un in the demilitarized zone (DMZ) that divides the North and South Korea in Panmunjom, President Donald Trump said today that teams from the United States and North Korea would start meetings “over the next two or three weeks” for talks on Pyongyang’s nuclear program. Trump said he was in no rush for a deal. Negotiators will “start a process and we’ll see what happens,” South China Morning Post quoted him.

The two held a short press conference, no questions, at their meeting, with Trump saying “Well, I want to thank you, Chairman.  You hear the power of that voice.  Nobody has heard that voice before.  He doesn’t do news conferences, in case you haven’t heard.  And this was a special moment.”

“We’re not looking for speed, we’re looking to get it right,” Trump told reporters. “Speed is not the object… We want to see if we can do a really comprehensive, good deal. [But] a lot has already come up.”

“I would like to move away from the past and maintain good relations in the future,” Kim told Trump. Trump said he appreciated Kim’s presence, noting that many positive changes have happened. “The relationship we have developed has been so much,” Trump said. “This could be very a historic moment. I really enjoy being with you,” SCMP reported, which also pointed out that Trump is the first incumbent U.S. President to have visited the North Korean side of the border.

At a joint press conference in Seoul earlier in the day, South Korean President Moon Jae-in said the meeting at the border was crucial for the future of the denuclearization talks.