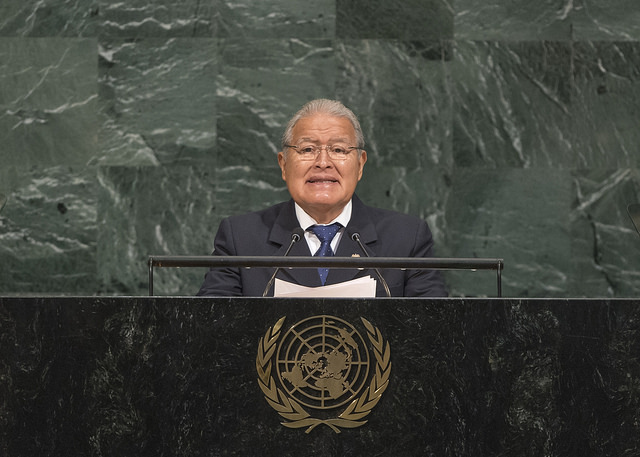 This statement by the President of the Schiller Institute was distributed at the opening of the 68th UN General Assembly in New York.

by Helga Zepp-LaRouche
President of the Schiller Institute

We all know that the current economic order in the world only allows a very small percentage of the population to live a life of luxury, that only a relatively small percentage live decently, that many languish in inhumane poverty, while what Pope Francis called “hidden euthanasia” is widespread.

Only a few people know that, just a few weeks ago, mankind avoided by a hair’s breadth the danger of extinction in a thermonuclear war, because that would have been the consequence of an escalation following a military strike against Syria.

Both of these dangers, which threaten the very existence of the human species, are ultimately the result of the economic system of globalization, in which “anonymous decisions” — signed by high-level officials — sacrifice man’s unique dignity and his life to mammon, the god of lucre.

The diplomatic initiative around Syria raises the hope that the danger of a regional and possibly world war has been once again averted. But as urgent as war avoidance is, it is not enough. If we, as a species, are to have a future, we need a real perspective for peace, a completely new paradigm, that leaves behind for once and for all the geometry of solving crises through war, and replaces it by defining the common goals of mankind.

Is it not in the interest of all people on this planet to ensure energy security and raw material security as quickly as possible, and by so doing to overcome an essential cause of hunger and of the war danger? Is it therefore not in the interest of all people and all nations to launch the best possible crash program for the use of thermonuclear fusion, along the lines of the “Manhattan Project” for developing the atomic bomb during the Second World War, but this time for peaceful purposes and for the good of all mankind?

Likewise, it is high time to put the legitimate demand of the Non-Aligned Movement for a just world economic order back on the agenda. Such a new order could begin with the proposal of Chinese President Xi Jinping at the latest SCO conference, to build the new Silk Road as the basis for peaceful cooperation among all the countries along that route. This proposal is totally in line with the proposal for a Eurasian Landbridge that the Schiller Institute advanced in 1991, in reaction to the disintegration of the Soviet Union. That concept has been expanded, in the meantime, to an international Landbridge to bring people together, which has gained many friends and supporters throughout the world. Such a worldwide infrastructure and development program would hoist us onto the next higher economic platform where hunger and underdevelopment could be eliminated forever.

If the nations united in the UN General Assembly decide to replace the profoundly immoral and unjust system of globalization by an order allowing an alliance of sovereign Republics — in the tradition of John Quincy Adams — to work together in the common interests of mankind, our civilization can enter, consciously, into the next phase of evolution.

Why should that not be possible? We are the only creatures who, thanks to human creativity, can consciously improve the basis of our existence through scientific and technological innovation, and thus raise our living standards and life expectancy. Likewise, we are the only species which can scientifically determine with precision where the next step of research into the physical order of creation must lie, to ensure the continued existence of our species in the universe.

The Earth is not a closed, entropic system with finite resources. Our solar system and our galaxy are only a tiny part of the universe, which develops itself anti-entropically. What is wonderful about our order of creation is that there exists a verifiable concordance between the laws of the macrocosmos — the universe — and of the microcosmos — our creative reason — which is expressed in the physical power of our immaterial ideas.

What we need today more than anything else is tender love for mankind, an audacious vision for the future which looks at our planet from the perspective of astronauts and cosmonauts who see no borders, but only one mankind, while at the same time looking to the stars.

Friedrich Schiller said as much in his poem, and Ludwig van Beethoven in his 9th Symphony put those words to music:

Every man becomes a brother
Take this kiss throughout the world!
Brothers, o’er the stars unfurld
Must reside a loving father.

Our tormented mankind needs courageous leaders, committed to the mission of leading the world out of the danger zones of destruction into a better future, which is within reach!