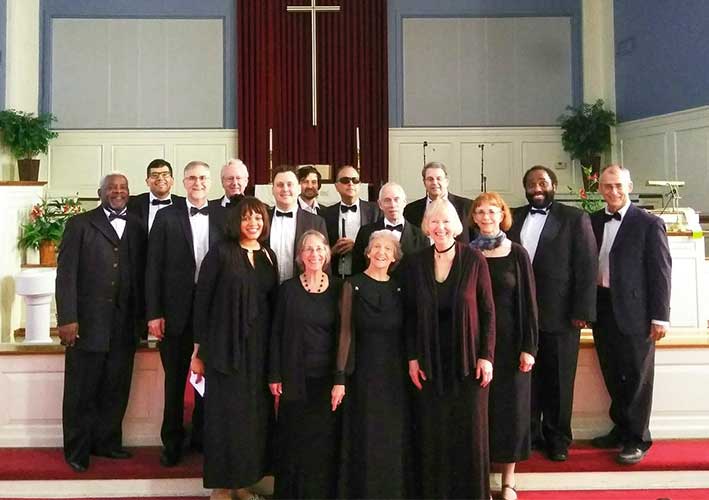 May 10, 2019by Jason Ross in General, Houston SI activity, Our musical events

The Houston Schiller Institute Community Chorus, with Maestro Dorceal Duckens, our great pianist Joshua, and newly added string players, made beautiful music unto Heaven during our May 5th concert at the Riverside United Methodist Church, 3rd Ward, Houston. Ironically, the lights in the church sanctuary were not working the day of the concert; thus, creating a dramatic setting as the sun set through the church’s gorgeous stained glass windows. With wonderful acoustics in the church, and the evening sun filling the sanctuary, the concert made a big impact on the audience. The “Mozart Effect” on the 50+ attendees in audience was palpable.

While the church was not full, those in attendance reflected a broad outreach of our organizing around the city. We had a number of pastors, several members of the Ebony Opera Guild, members of our director’s church, Chinese contacts of the Schiller Institute, and a few members of the Riverside Church. Many attending knew Maestro Duckens only as a great singer and were amazed to discover he is also a great conductor! Also in attendance was the vocal coach from another local opera company, as well as the Choir Master from a local church.  A couple drove over an hour after they had seen the concert advertised on an online blog. Before the concert, while speaking to a member of the chorus, the couple was very curious about the connection between Schiller the poet, economics, politics, and music but as they were leaving, they shook the member’s hand and promised they were going to look up Schiller when they got home.  One of the directors from a homeless center was amazed. He had never heard Mozart performed before and had no idea about his role in the American Revolution. Another woman, employed by the church, told a member of the chorus she used to be a singer until she developed nodes on her vocal chords and could no longer sing the high soprano notes. Imagine her fascination when she learned we sing at the C=256 pitch to preserve the human voice and instruments! During the performance she was observed singing softly with every Spiritual. Another attendee, who has followed the work of the Schiller Institute and chorus member Kesha Rogers’ campaigns for congress, told a member afterwards that this concert had “healed him” since he had just suffered the loss of a child two weeks ago. 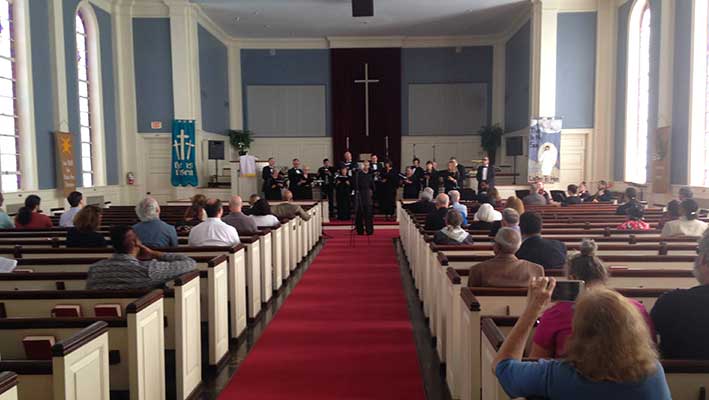 Worth noting is the impact the Mozart Solemn Vespers on this audience, many of whom knew the Spirituals well. One of the “church ladies” remarked to a chorus member, “you guys were full of the Spirit—even the Mozart was like that!” In observing the ladies during the concert, he noted how they looked at each other in amazement during the intense contrapuntal sections. One turned to two others and mouthed, “I want to clap” after the Laudate Dominum, but held herself back, as did the rest of the audience, until we had completed the entire work.  Following the event, we had a small reception where several of the attendees joined us for discussion; people were just beaming with joy.

Several people inquired about joining our chorus. This was certainly on a higher level than anything that we have done before. We truly unified and brought the community together from all walks of life around beautiful bel-canto music that moved the mind and soul. We were so happy to be joining our friends there in NY as both choruses sang in harmony together in different space times.

For more information about the Schiller Community Chorus or how to join, visit our Houston Chorus page.