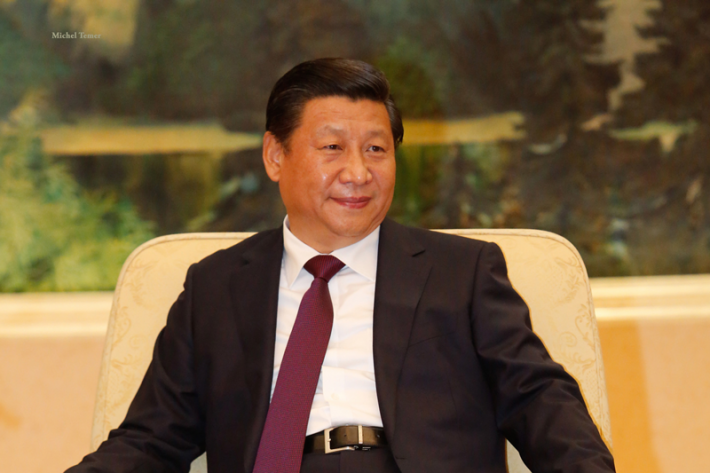 July 25 –Speaking today in Johannesburg to the BRICS Business Forum, Chinese President Xi Jinping laid out the choices before his audience, stressing that “the international community has reached a new crossroads,” while especially emphasizing the role the BRICS must play in ensuring the development of Africa. Will the world choose cooperation or confrontation? he asked, sounding many of the themes that Schiller Institute President Helga Zepp-LaRouche has recently emphasized about whether humanity will rise to the occasion to ensure Africa’s development and fight for “a new type of international relations and a shared future for mankind.”

Xi focused on several points, chief among them the the need to develop and protect a multilateral world, in which all countries have the right to develop, pursuit of science and technology to “seize” development opportunities, and pursuit of the Belt and Road Initiative, “to create new opportunities of social and economic development for participating countries… It is our sincere hope that other BRICS countries, African countries and other emerging markets and developing countries, will forge strong partnerships with this Initiative so that its benefits will reach more countries and its peoples.” He also outlined China’s own contributions to world peace and development.

The Chinese leader placed great emphasis on the pursuit of science and technology as a driver for economic development. “Science and technology, as the primary production forces, have provided inexhaustible power, driving progress of human civilization. Humanity had made giant leaps forward as it progressed from an agricultural civilization to an industrial civilization.” And, “the world today has once again reached a critical historic juncture. In the unfolding new round of scientific and technological revolution and industrial transformation, new things will inevitably emerge and take the place of old ones… if countries succeed in seizing opportunities that have presented themselves, they will be able to achieve new dynamic growth and deliver better lives to their people.”

And Africa? Xi pointed to the fact that Africa is home “to more developing countries than any other continent, Africa has more development potential than any other region in the world. We should strengthen cooperation with Africa, support its development and make BRICS-Africa cooperation a model for South-South cooperation. We should actively carry out cooperation with African countries in such areas as poverty reduction, food security, innovation, infrastructure development and industrialization in a way compatible with their national conditions. We should help African countries develop their economic structure, contribute to the implementation of Agenda 2063 of the African Union and thus enable Africa, an ancient continent, to gain strong vitality.”

China and African countries, Xi said, “are destined to be good friends, good brothers and good partners, and China-Africa cooperation stands as a fine example of South-South cooperation.” He pointed out that the September summit in Beijing of the Forum on China-African Cooperation, titled “China and Africa: Toward an Even Stronger Community with a Shared Future through Win-Win Cooperation,” intends to “enhance complementarity between China-Africa joint efforts to pursue the Belt and Road Initiative, the 2030 Agenda and the 2063 Agenda on the one hand and the development strategies of African countries on the other. This will enable China and Africa to pursue high quality and high standard cooperation for mutual benefit and common development.”

In concluding, Xi recalled that 2018 marks the centennial of the birth of the revered South African leader Nelson Mandela. Reciting one of Mandela’s famous sayings, “After climbing a great hill, one only finds that there are many more hills to climb,” he remarked that this should serve as inspiration for the BRICS. “Indeed, the history of BRICS cooperation is a journey of our five countries climbing great hills only to reach new heights. I am convinced that when our five countries forge ahead together, we will scale new peaks, reach new heights, and make even greater contribution to peace and development of mankind.”