China Ambassador: “Why U.S. Shouldn’t Sit Out the Belt and Road” 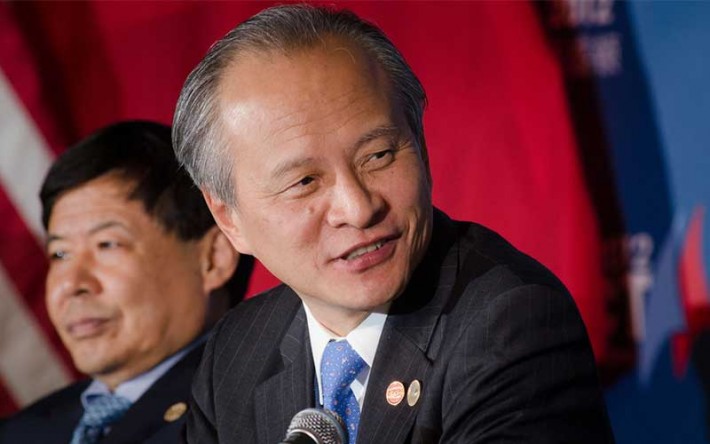 China Ambassador: “Why U.S. Shouldn’t Sit Out the Belt and Road”

Under the headline above, China’s Ambassador in Washington Cui Tiankai wrote a column in Fortune magazine on the eve of the Second Belt and Road Forum in Beijing. “Don’t miss all the winning” involved in the Belt and Road, Cui admonishes, perhaps referring to one of President Donald Trump’s favorite phrases.

The ambassador starts with a very direct challenge:

“Imagine the potential of China and the United States, the world’s two largest, most vibrant economies, collaborating on the most ambitious development project in history. The scenario is no fantasy: China’s Belt and Road Initiative (BRI), which kicked off almost six years ago, will eventually connect a vast swath of the world, creating huge yields in economic activity, and wiring the world together as never before. However, the United States remains on the sidelines, and this has implications not only in terms of missed opportunities for growth in the U.S., but for the cause of global development which needs the ingenuity and the industry of the U.S.”

Cui gives many arguments for the BRI which reflect those of Xi Jinping. He cites total benefits to the 126 countries now in relationship to it: $6 trillion in total trade, $80 billion in direct investment by China; 300,000 new “local jobs” in those countries; Kazakhstan’s first-ever access to the Pacific Ocean; 6,000 new jobs in Europe’s largest inland port, Duisburg; Kenya’s beginning of economic development and industrialization; and so on, with citations from national leaders.

“So where is the U.S. amid all of this winning?” he concludes.

“There are countless opportunities to U.S. corporations available through BRI projects. Honeywell International is already working with partners to further oil and gas development along the Belt and Road. General Electric has signed a number of deals with partners of the BRI which will help to provide reliable power and energy to critical regions across the world. Caterpillar is working with China’s initiative to help solve Pakistan’s severe power shortages. Meanwhile, Citibank is actively providing financing for projects through the markets along the Belt and Road. We certainly welcome more taking part…. My suggestion is that the U.S. embrace this opportunity.”