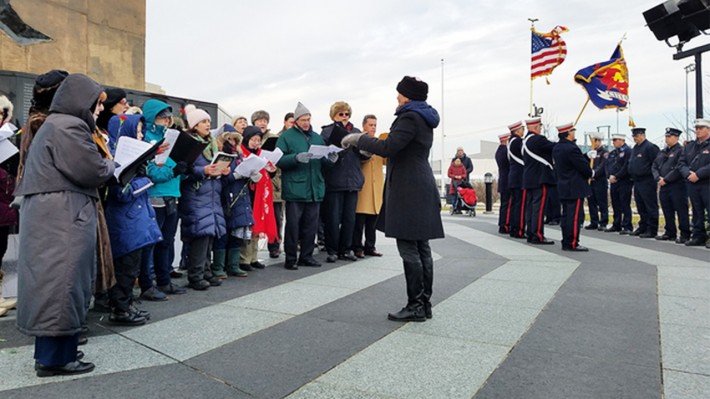 On January 3rd, 2019, for the third year in a row, a memorial was held in Bayonne, New Jersey for the victims of the December 25th, 2016 plane crash which took the lives of the many members of Russia’s famous Alexandrov Ensemble, journalists, philanthropist Elizaveta Glinka, and others.  This memorial, organized by the Schiller Institute, took place at the foot of the “Tear Drop Memorial,” a 100-foot statue gifted to the United States by the Russian Federation in 2005 in honor of the victims of the September 11th, 2001 terrorist attacks.

Members of the Schiller Institute and the Schiller Institute NYC Chorus, led by Diane Sare, Founder and Co-Director, were joined by the Bayonne Fire Department Honor Guard, Captain Haiber and Chief Weaver of the Bayonne Fire Department, Dmitry Chumakov, Deputy Permanent Representative of the Russian Federation, Dr. Louay Falouh, Minister Counselor of the Syrian UN Mission, Father John Fencik of Saint Mary’s Carpatho-Russian Orthodox Church, and others in the ceremony. In opening the ceremony, the Chorus sang both the Russian national anthem (in Russian) and the US national anthem.  The Bayonne Fire Department Honor Guard stood at attention throughout the forty five minute ceremony.

These performances were followed by comments from Deputy Permanent Representative Chumakov, who paid tribute to the victims of the 2016 tragedy and spoke to the continuation of the efforts of both the reconstituted Alexandrov Ensemble and the Charity Foundation of Elizaveta Glinka. He concluded with significant statement of Russian policy in Syria: “Considerable progress has been made on Syria in 2018. Now we need to step up joint efforts to launch the Constitutional Committee in Geneva, that would enjoy support of the Syrian parties, in accordance with the decisions of the Syrian National Dialogue Congress in Sochi. Syria’s future must be determined by the Syrians themselves in a political process they conduct and control with international mediation. Such an approach would contribute to settling and overcoming the consequences of the war; re-establishing the country’s full sovereignty and territorial integrity.” Mr. Chumakov’s full statement is available on the Russian Federation UN Mission’s website.

Then spoke Dr. Louay Falouh, Minister Counselor of the Syrian UN Mission, who thanked the government of the Russian Federation for their work to support Syria, and expressed his deep condolences for the losses of December 25th, 2016.  Chief Weaver and Captain Haiber of the Bayonne Fire Department separately gave profound remarks expressing their condolences, as well as their thanks to Russia for the comfort they personally felt when visiting the Tear Drop Memorial. Bayonne first responders received enormous numbers of people fleeing by boat from Manhattan on 9/11. Captain Haiber told the audience, “At times like this, we are neither Russian nor American—we are human.” He also spoke in Russian, expressing his wishes for peace and friendship. 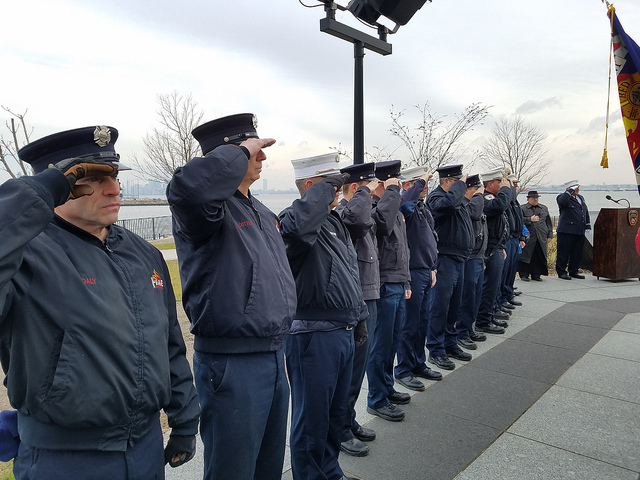 Father Fencik, whose close relative had been the translator at the famous meeting on the Elbe River between Soviet and American forces, gave an invocation saying that these dead will never be forgotten, and then gave a sung prayer in Russian.

Two years after the tragic death of 64 members of the Alexandrov Choir Ensemble on their way to Syria on December 25th, 2016, that country is now almost entirely freed from the terror of ISIS due to the determined intervention of Russia in collaboration with the Syrian army. This liberation demonstrates what human beings can do when they unite with a good plan and for a just cause, and that, as Friedrich Schiller would say, even the most tyrannical foe can be subdued. As now there will be a more hopeful period in the history of Syria, with the economic reconstruction and the return of millions of refugees, the memory of the Alexandrov Choir Ensemble will be written into the history of Syria and should be celebrated every year with beautiful concerts in many cities, celebrating the Russian-Syrian friendship and the immortality of great art and the artists, who devote their lives to the ennoblement of mankind.

Diane concluded her remarks by saying that this moment called to mind to words that Handel had immortalized the his Messiah “Death is Swallowed up in Victory.”

Each of the speakers made a special point of thanking the Schiller Institute for organizing the event. Russian news service TASS, as well as TV stations Russia 1 and RT were present.

Participation in this event had a profound effect on our activists and choir members who joined in.  Patrick from Connecticut said, “I was so glad to be there and be a part of this. As I looked around and saw who was gathered here, I felt like we were on a kind of different planet from the rest of the population – and how important is that we do this.”

View more pictures from the event.