History Is Now Being Written in Asia! The EU Summit Must Follow the Example of Singapore! 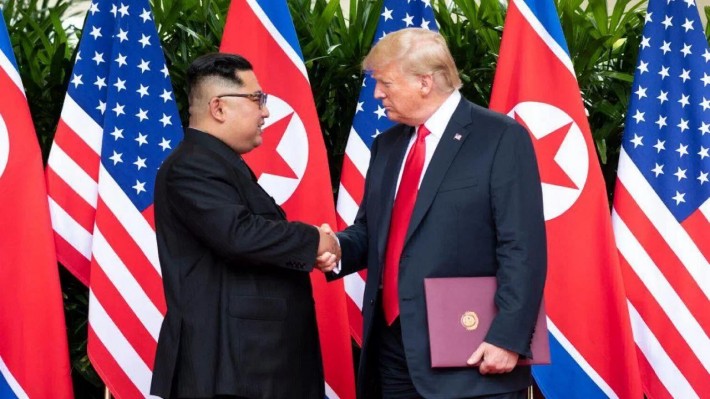 History Is Now Being Written in Asia! The EU Summit Must Follow the Example of Singapore!

The contrast could hardly be clearer. In Singapore, the historic summit between President Donald Trump and Chairman Kim Jong-un launched a process that, beyond the region itself, could guarantee world peace for the future; at the same time, the Shanghai Cooperation Organization (SCO) rang in a new era in building a new world order based on trust, harmony and joint development. On the other hand, there was the disunited, antagonistic G7 summit, whose European heads of state and government then returned home, only to plunge into a new dispute over the flare-up of the refugee crisis, and to react to that crisis with remedies as heinous as they are useless. It is high time for a policy reorientation on the old continent! The immediate opportunity to do so is the upcoming EU summit on June 28-29!

Notwithstanding all the cynical comments from the usual suspects in the mainstream media, the groundbreaking summit between Trump and Kim Jong-un would never have been possible without the spirit of the New Silk Road, that has swept over Asia in particular in recent years. Indeed, the idea of economically including North Korea in the integration of China’s Belt and Road Initiative and the Eurasian Economic Union was very much present at last year’s Eastern Economic Forum in Vladivostok. And at the Panmunjom Inter-Korean summit in April of this year, South Korean President Moon Jae-in presented his North Korean counterpart with a USB stick containing detailed plans for the economic development of the North.

The White House, in collaboration with the National Security Council, had prepared a video envisaging the perspective of a modern, industrialized, prosperous North Korea—a high-speed rail system, a Chinese maglev, industrial parks, a country on the rise – which Trump showed the North Korean Chairman during their meeting before the final press conference. One can only recommend to those minds in the West that have already been “categorized” and stuffed full of prejudices by the media, to watch Trump’s press conference themselves in the archives. A sovereign U.S. President presented the outcome of the summit: the total nuclear disarmament of North Korea, in return for security guarantees, the lifting of sanctions and the pledge to make North Korea prosperous. In addition, he announced the immediate end of the U.S.-South Korean military maneuvers. That will save a lot of money, he said, and they are “very provocative” anyway.

The people of both Koreas reacted ecstatically to the live broadcast of the Summit and the press conference. President Moon repeatedly commented with enthusiastic applause. We in Germany should recall the elation at the time of the fall of the Berlin Wall to get a sense of the effect on the population there.

Not only did China and Russia in particular conduct important background negotiations with North Korea in the run-up to the summit, but the Russian government has also pledged to assist in economic development, while the Chinese government promised to help provide security guarantees for North Korea. Russian Foreign Minister Sergey Lavrov stressed the importance of resuming the six-party talks for an internationally secured implementation of the agreement. China’s Global Times wrote that the North Korean economy is by no means as dilapidated as is often assumed: “North Korea has economic and geographic advantages to join the B&R, which will help the country realize its economic potential. It won’t be easy, and it won’t happen overnight. However, getting North Korea into the B&R initiative to promote economic integration may be easier than what people would have imagined.”

The almost simultaneous SCO summit, which India and Pakistan attended for the first time as full members, was opened by President Xi Jinping with the greeting that the future will be guided by the spirit of Confucius, whose birthplace is in the same Shandong Province as the conference venue in Qingdao. China’s Foreign Minister Wang Yi described the proceedings of the conference as the beginning of a new era in creating an international order based on mutual trust, mutual benefit, equality, respect for diversity and joint development. That, he explained, would transcend the outdated concepts of the clash of civilizations, the Cold War, zero-sum games, or exclusionary clubs.

How different was the G7 summit in Canada! The photo showing Mrs. Merkel, German Chancellor, in a confrontational attitude toward Trump, surrounded by the other heads of state and government, is likewise an expression of the break-up of the geopolitically oriented post-war order, of the “G6 against 1” formation. But actually it was only the G4, because Trump, Japanese Prime Minister Shinzo Abe and Italian Prime Minister Giuseppe Conte do not agree on the continuation of sanctions against Russia. The disunity of the Europeans is clearly visible on the issue of the refugee crisis. It should be obvious for everyone that neither the idea of turning back refugees at the EU’s external borders, by whatever method, is practicable, nor will there will be unity in the EU before the upcoming summit on the basis of the “solutions” proposed so far.

German Interior Minister Horst Seehofer’s proposal to turn away refugees on the German border, if they are already registered in another EU member country, will tend to lead to the end of the EU’s Schengen agreement, and thereby to the destruction of the foundation of the monetary union. The idea of so-called detention camps in countries such as Libya, which has sunk into internal chaos as a result of President Barack Obama’s military intervention, is so barbaric that it draws the oft-cited “western values” once and for all ad absurdum.

It is expected that by 2040, two billion people will be living in Africa, a huge part of them young people who need education, a job and more generally, a perspective for the future. What the African continent needs is massive investment in infrastructure, industrial capacities and agriculture, of precisely the type that China has made in the last 10 years. China thus helped reduce poverty in Africa from 56% in 1990 to 43% in 2012. At the G20 summit in Hamburg in 2017, Xi Jinping explicitly and repeatedly proposed to Angela Merkel to cooperate with the New Silk Road in Africa. The German government, for its part, has repeatedly spoken of a “Marshall Plan for Africa,” but other than the usual green “sustainable” projects, detention camps, and the securing of the EU’s external borders, nothing has been forthcoming.

The new Undersecretary of State in the Italian Ministry of Development, Professor Michele Geraci, has just published a memorandum for cooperation between Italy and China, in which he identifies eleven sectors in which Italy has an existential interest to cooperate with China. Among other points, the paper states: “Africa and the migrants? Who can help Africa? China.” Geraci reports that China has invested the most in Africa and thanks to China, poverty in Africa has started to decrease for the first time. “China offers Europe and Italy in particular, an historical opportunity to cooperate for the social-economic stabilization of Africa, which we should absolutely not miss. Therefore, we must strengthen cooperation between Italy and China in Africa.”

If the Merkel government is still in place when this article appears, there is a very good way by which the present crises can be overcome – from the migrant crisis to the government crisis and the EU crisis. Taking the example set by the Singapore Summit—that real change is possible, and that the past does not determine the future—the German government should ensure that the agenda of the upcoming European Union summit on June 28-29 be quickly changed. EU cooperation with China’s New Silk Road initiative for the development of Africa should be made the sole subject on the agenda, and Xi Jinping or Wang Yi should be invited to attend, as well as some African heads of state who are already cooperating with China.

If the EU summit, the Chinese government representative, and the African representatives then pronounce in a joint declaration the commitment to undertake a joint crash program for a pan-African infrastructure and development program, and promise all the young people of Africa that the continent will overcome poverty in a short time, such a declaration, due to the participation of China, would have all the credibility in the world in Africa, and would change the dynamic in all the countries towards definite hope for the future, and thus would immediately effect a change in the migrant crisis. It would also free the EU from its current crisis of legitimacy, and give the European nations a mission which would place the unity of Europe on a great new level.

Will the heads of state and government of Europe manage to follow the example of Trump and Kim Jong-un? The prospect of developing Africa together with China, would also give President Trump the urgently needed opportunity to overcome the otherwise looming spiral of trade war, and to balance the [U.S.] trade deficit by increasing trade, primarily through investment in joint ventures in third countries.

The crisis in Europe, the migrant crisis, the crisis of the German government—they have all assumed such dimensions, that the opportunity for a change of course in policy can absolutely be seized. Needed now, are the people to make it happen.