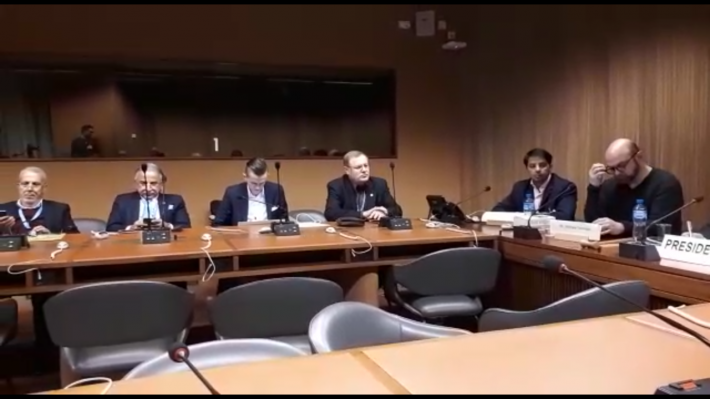 March 15, 2018— During the present UN Human Rights Council Session in Geneva, Elke Fimmen of the Schiller Institute addressed a seminar on „Human Rights in Yemen: Sanctions“ on March 13th in Geneva. The seminar was sponsored by the Organization for Defending Victims of Violence (ODVV) and jointly organized with INSAN for Human Rights and Peace.

The 1.5 hrs seminar was chaired and moderated by Dr. Hassan Fartousi, researcher in international law at the Universiyt of Geneva. Speakers included human rights activists Mohammad Abo Taleb and Abdullah Alkebsi from INSAN, who showed the horrible effects of the illegal , Saudi-coalition imposed sanctions for the population, including the impossibility to seek medical care abroad, with the internal health system being destroyed. Andrew Feinstein, executive director of Corruption Watch UK, called for an end to the illegal arms supply by the UK (BAE etc.) and the USA.

Elke Fimmen, who was introduced as representing the LaRouche-Movement in Germany, spoke about the genocidal and illegal sanctions, imposed on top of the original UN Resolution #2216 of 2015 for weapons embargo against a few individuals, which has been used as a pretext for a full war of aggression and blockade of airports such as Sanaa and the important ports like Houdeidah, through which food, fuel, medical and others crucial items are imported, on which Yemen is fully dependent. The guarantee of full humanitarian assistance and safety of individuals as demanded in the original UN-resolution has been fully violated.

Hundreds of thousands of Yemenis have paid with their lives during the three year war of agression, led by Saudi-Arabia, the UK and USA and there will be complete catastrophe, if this is allowed to continue, as clearly stated in the January 2018 UN Humanitarian Response Plan on Yemen.

The report presents in shocking detail the deteriorating situation in all sectors, and concludes that the lack of basic goods, particular fuel by further blockade of commercial imports will result „in a crisis of dimensions that would be beyond the humanitarian community’s response capacity“, if the ports cannot be opened for all imports. So, nobody can claim, he or she „didn’t know“.

The sanctions, killing the Yemen population have become an integrated part of the military operations by the Saudi coalition and are used as warfare tactic with the use of hunger and epidemics. To deliberately destroy a people’s past, present and future, thus denying its existence in human history, fulfills the definition of genocide as the Convention on the Prevention and Punishment of the Crime of Genocide.

Elke cited the November 2017 Schiller Institute Bad Soden resolution on Yemen, which had called for an immediate ceasefire, the lifting of the blockades, the return to the national reconciliation process and dialogue for a political solution (without interference by outside forces, but under the UN umbrella and with sponsorship of Russia, China and the United States as guarantors of its implementation); and most importantly, to assist Yemen in „a rapid and large scale reconstruction process focussed on infrastructure projects to regain the livelihood of the nation, and the integration of Yemen into the Belt and Road Initiative“ to create a future.

The seminar was attended by around 40 participants and was transmitted live TV-stream to Yemen.

The same morning, another seminar had adressed the situation of journalists in Yemen, and reported that another effect of the blockade is that any foreign journalists, who had been invited to come to Yemen , cannot travel there and report the truth of the ongoing genocide there. This Thursday, there will be another event on the Human Rights situation in Yemen, concluding three weeks of interventions in Geneva.