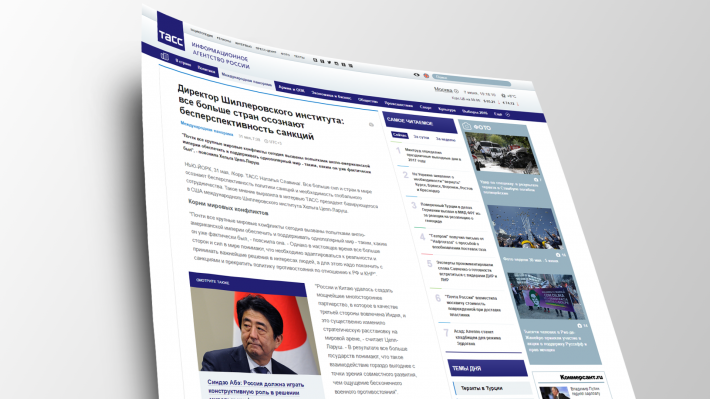 Schiller Institute founder Helga Zepp-LaRouche, called the “Silk Road Lady” in China and the first promoter with Lyndon LaRouche of this policy in Europe, was interviewed by TASS May 31, 2016 on the decision for a new global war or for economic development and cooperation.

TASS: How would you assess the current international cooperation?

Zepp-LaRouche: There are two completely different dynamics on the planet right now. On the one side you have the convergence of President Putin’s very successful military flanks, such as his intervention in Syria, which created the potential for peace, combined with his various diplomatic interventions in Asia, parallel to the Chinese New Silk Road initiatives.

These efforts represent a win-win perspective for over seventy participating countries already.

On the other side there is an extremely dangerous confrontation from the side of the United States, Great Britain, the EU and NATO against Russia and China, which has brought the world to a multiple crisis, more dangerous than at the height of the Cold War.

TASS: In what areas it is more active and where it is not?

Zepp-LaRouche:In the case of Syria the cooperation between Foreign Minister Lavrov and Secretary of State Kerry, as well as the Geneva cooperation between Russia and the U.S., is very positive. However, as long as the United States do not abandon their policy of regime change, the situation remains dangerous. President Putin has proven to be a brilliant strategist.

This allows confidence that the warhawks in NATO will not succeed to lure Russia into a trap, giving them a pretext for a preventive attack.

TASS: What are the issues we need to step up cooperation between the West and Russia? Why?

Zepp-LaRouche: The reality is, that the entire trans-Atlantic sector is bankrupt and about to blow up in a bigger way than in 2008. Japanese Prime Minister Abe, after a very important visit in Russia, made that point at the recent G7 meeting emphatically, but was rebuffed by President Obama, who insisted, that “the recovery is improving”, which is absurd in light of the negative interest rates of the central banks and the debate around “helicopter money”.

Therefore the West needs, more than Asia, the kind of economic cooperation of the One Road One Belt/Eurasian Economic Union cooperation, integrating Eurasia from Vladivostok to Lisbon, but also inviting the U.S. to participate in this perspective. The only way a catastrophe can be avoided, is if we succeed to overcome geopolitics and reach a new paradigm, based on a global development partnership and the common aims of mankind.

TASS: Why, despite the obvious threat of terrorism, cybercrime and other international challenges, does the West so hinder cooperation with Russia?

Zepp-LaRouche: Almost all important conflicts derive from the effort of the Anglo-American empire to maintain an unipolar world, at a point, where it has de facto ceased to exist already. More and more forces in the world realize that they have to make existential decisions, and that the interests of their nations are much better served by stopping sanctions and confrontation against Russia and China.

The fact that Russia and China have created a very strong strategic partnership, with India a third partner, has shifted the strategic balance in the world. More and more countries are seeing it as more beneficial to cooperate for joint development, than to be under the yoke of military confrontation. We are at a branching point in history, and at such moments, what counts is leadership of the kind we have seen from President Putin.