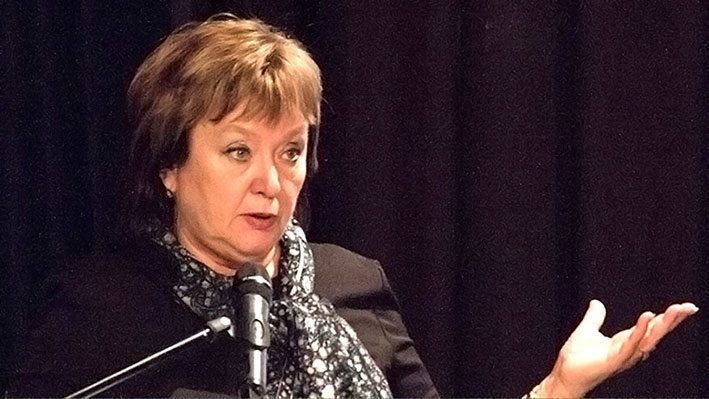 American statesman Lyndon LaRouche and his wife Schiller Institute founder Helga Zepp-LaRouche, today forcefully denounced a Nazi-led campaign being carried out by the Security Service of Ukraine (SBU) to defame and threaten the prominent Ukrainian economist and former Member of Parliament Dr. Natalia Vitrenko, a heroine and leading intellectual leader of that country.

“There has to be a high suspicion that this is being orchestrated by U.S. Assistant Secretary of State Victoria Nuland,” said Lyndon LaRouche today, “or by someone else with an affinity for Nazis in the Bandera tradition, such as Nuland is notorious for.”

Helga Zepp-LaRouche, who in February 1997 co-initiated with Vitrenko the “Appeal to Convoke a New Bretton Woods Conference,” as a pro-development reorganization of the world economic system, responded to news of the escalated attacks on the Ukrainian economist and politician: “These slanders are all the more despicable, in that they occur one month before the 70th anniversary of the defeat of Nazism in Europe, in May 1945. The nations said after the end of that war, ‘Never again!’, but the Western governments have forgotten about that pledge. Natalia Vitrenko has had the integrity to expose the neo-Nazi revival, and to give evidence of Banderite atrocities, both historically and in our day, while Victoria Nuland’s chosen Prime Minister Arseni ‘Yats’ Yatsenyuk, on the contrary, had the nerve to say on German television that the Nazi invasion never occurred—that it was only the Soviet Union that ‘occupied’ Ukraine.”

Dr. Vitrenko has twice been interrogated by the SBU for supposedly receiving Russian funds for the purpose of engaging in what some media have maliciously depicted as “propaganda work to discredit the Ukrainian government authorities, to provoke armed conflict between different layers of the population of Ukraine, to incite ethnic hatred, and to provide information support for conducting ‘referenda’ in Ukraine’s eastern regions.” A statement issued yesterday by Vitrenko’s Progressive Socialist Party of Ukraine (PSPU) pointed to stories published this week by the Glavcom news agency (glavcom.ua) and other media, which cited SBU “suspicions” about Vitrenko’s receiving money from the Russian Foreign Ministry-run Fund for the Support and Defense of the Rights of Compatriots Residing Abroad.

The allegations date to May 2014, when the accounts of Dar Zhizni (Gift of Life), a women’s NGO headed by Vitrenko, were frozen. According to Ukrainian media, this was done “in the framework of an SBU investigation of funds transfers through Ukrinbank, intended for persons suspected of infringement of the territorial integrity and inviolability of Ukraine.” Headlines in the current flood of media coverage name Vitrenko as “a major sponsor of separatists and terrorists,” which are broad categories being used by the current Ukrainian authorities against their political opponents. Alexander Bondarchuk, head of the small Ukrainian Labor Party, and a colleague of Vitrenko both in the Parliament and as a co-signer on her statements against the violent, neo-Nazi-spearheaded February 2014 coup d’etat in Kiev and its aftermath, was arrested March 18 on charges of “infringing the territorial integrity of Ukraine.”

Translations of the PSPU statement on the renewed threat to Vitrenko, as well as one on the Bondarchuk case, are provided below.

SBU head Valentyn Nalyvaychenko announced in an April 1 interview that the model for his agency is Stepan Bandera’s Organization of Ukrainian Nationalists-Ukrainian Insurgent Army (OUN-UPA), which collaborated with the Nazis during their invasion of the Soviet Union. In view of Vitrenko’s biography and her courage in continuing to speak out on the economic and political devastation of Ukraine since last year’s coup, the attacks have the pro-Nazi stench, typical of U.S. Assistant Secretary of State Victoria Nuland’s projects in Ukraine. Nalyvaychenko, long associated with the Bandera Trident (Tryzub) organization, a core component of the coup’s Right Sector shock troops, boasted in a May 2014 Atlantic Council conference call of his “intensive” intelligence-sharing and other cooperation with “U.S. colleagues.”

Zepp-LaRouche noted that Vitrenko has spoken frequently in Europe, on both the harm done to Ukraine’s economy by IMF and free-trade policies, and the threat of the revival of fascist ideology in Ukraine, encouraged from the West. “Dr. Vitrenko is well-known and highly respected in Europe,” said Zepp-LaRouche, “and she has had high-level meetings both there and, in earlier years, in the United States. It is important for political figures worldwide to condemn these ludicrous attacks on Natalia Vitrenko, and identify where they are coming from.”

LaRouche and Zepp-LaRouche were Vitrenko’s guests in Kiev in 1995, when she was an MP. An economist specializing on Ukraine’s social services sector and the impact of International Monetary Fund (IMF) conditionalities, she ran a strong campaign for the Presidency of Ukraine in 1999, polling 11% even after her campaign was disrupted by an assassination attempt, in which she and 40 others were injured by grenades thrown at a rally. In recent years, Dr. Vitrenko spoke at conferences of the Schiller Institute in Frankfurt, Germany, in April 2013 and October 2014.

In a speech video-recorded for the March 28-29, 2015 conference of the Citizens Electoral Council of Australia, Vitrenko herself recalled that, “From February 23 to March 5, 2014, our delegation of leading representatives of some Ukrainian leftist parties was able to tour Europe, visiting France, German, and Italy,” where they held “dozens of meetings, press conferences, and interviews… I was able on 26 February 2014 to hold a press conference at the European Parliament. … Already then, we warned about the threat of civil war and the disintegration of the country, which could lead to World War Three. And at that time, I called on Berlin, Moscow, and Paris to unite efforts: specifically these three centers—Berlin, Moscow, Paris—to unite their efforts and prevent the Nazis from taking over in Ukraine, and to help institute a ban on all neo-Nazi parties and movements in Ukraine.” <http://cecaust.com.au/2015conference/panel_03/01_natlaia_vitrenko/20150329_vitrenko.html>

Natalia Vitrenko’s latest video address, posted today on her website www.vitrenko.org, is titled “A Military Junta instead of European Values.” She analyzes the law introduced into Parliament April 3 by President Petro Poroshenko, which provides for declaring martial law in Ukraine either in the face of an armed invasion, or “the threat of attack.” The latter formulation, Vitrenko alleges, provides for acting on the basis of “fabricated threats”—just like the SBU’s “bluff, that Vitrenko is threatening the territorial integrity of Ukraine.”

PSPU Press Service statement
The Security Service of Ukraine (SBU) is continuing political defamation against the left opposition party leader, People’s Deputy of Ukraine, and former Presidential candidate, Doctor of Economics Natalia Vitrenko. The latest piece of fakery was disseminated yesterday on the websites “http://glavcom.ua/” and “http://www.ukr.net/”.
The false accusation was embedded in the article’s headline, which declared: “Vitrenko Received 8 Million Rubles from Russian Minister Lavrov.” Further on, the motive for this defamation is disclosed: “Investigators suspect that these funds will be used for other purposes. In particular, that they will be used for propaganda work to discredit the Ukrainian government authorities, to provoke armed conflict between different layers of the population of Ukraine, to incite ethnic hatred, and to provide information support for conducting ‘referenda’ in Ukraine’s eastern regions.”
It is no accident, that this latest falsehood has been disseminated. The regime brought to power by the Euromaidan is discrediting itself through economic collapse, social genocide, corruption, and its inability to establish peace and preserve the territorial integrity of the country or realize the promised European values. Natalia Vitrenko has been interrogated twice at the SBU. She offered facts to prove that the “suspicions” are invalid and the statements false. But efforts to defame her and shape a negative view of her on the part of the public are continuing, through the media.
As for these suspicions, they are either the product of minds that are hallucinating, or of officials experiencing a bad hangover, or of fear over bearing ultimate responsibility for defaming and tarnishing the business reputation, both within the country and worldwide, of Ukrainian statesman and political figure Natalia Mikhailovna Vitrenko.
We demand that Glavkom and Ukr.net publish a retraction, in the form of publication of this statement form the PSPU Press Service.

The following PSPU statement, dated 9 April 2015, concerns Alexander Vasilyevich Bondarchuk, head of the Ukrainian Labor Party (Marxist-Leninist), People’s Deputy of Ukraine, 2nd, 3rd, 4th sessions of the Supreme Rada, who has been a co-signer with Vitrenko on several statements against the February 2014 coup d’etat and its aftermath, such as the April 16, 2014 appeal “Stop the War of the Self-Proclaimed Ukrainian Authorities Against Their Own People!” Bondarchuk was arrested March 18. <http://www.larouchepub.com/pr/2014/140416_vitrenko_release.html>.

PSPU Press Service statement
On April 9, 2015 the Darnytsky District Court in the City of Kiev began a preliminary hearing on charges brought against People’s Deputy of Ukraine of the 3rd and 4th convocations, leader of the opposition Ukrainian Labor Party Alexander Vasilyevich Bondarchuk.

Alexander Bondarchuk is charged under Article 110, Section 1 of the Criminal Code of Ukraine, “Infringement of the Territorial Integrity of Ukraine.” The Security Service of Ukraine (SBU) has applied this article because of two articles concerning the authorities possessed by Southeast Ukraine, published in the newspaper Rabochy Klass (Working Class), of which A. Bondarchuk is editor-in-chief. The accusation is constructed on expert analysis done by the SBU, concluding that the articles contained indirect infringement on the territorial integrity of Ukraine.
A. Bondarchuk has new defense lawyers, in the trial. The first motion they announced sought to release the political leader from the cage in which the accused sits. The court went into conference and, upon returning to the courtroom, announced a recess in the session until April 17, 2015. A. Bondarchuk told journalists that his rights to defense during preparation for trial have been grossly violated. For more than a week, no his government lawyer failed to visit him. Newspapers have been withheld from him. He was notified of the April 9 court session at 23:15 on April 8.

A. Bondarchuk and his attorneys believe that the chief motive for the criminal prosecution of him is political.