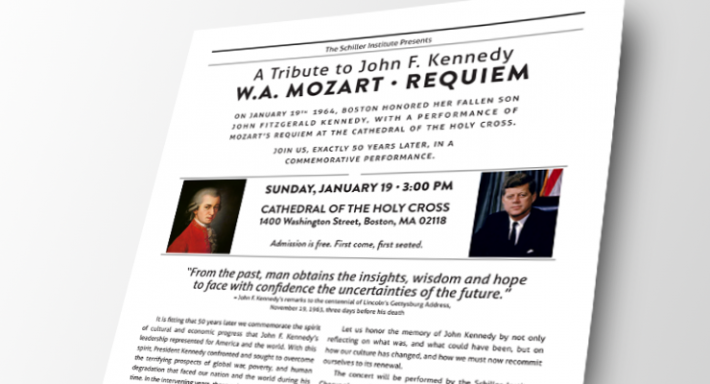 On January 19, 1964, Boston Honored Her Fallen Son John Fitzgerald Kennedy With A Performance of Mozart’s Requiem at the Cathedral of the Holy Cross

Join Us, Exactly 50 Years Later, In A Commemorative Performance.

“From the past, man obtains the insights, wisdom and hope to face with confidence the uncertainties of the future.”

It is fitting that 50 years later we commemorate the spirit of cultural and economic progress that John F. Kennedy’s leadership represented for America and the world. With this spirit, President Kennedy confronted and sought to overcome the terrifying prospects of global war, poverty, and human degradation that faced our nation and the world during his time. In the intervening years, these existential problems have come to threaten mankind in even greater magnitude, but the national mind that had joyfully embraced the challenge to conquer the Moon, has been supplanted by a spirit that belittles the sacredness of the human individual and the power of human creativity.

Wolfgang Amadeus Mozart’s Requiem is a most fitting tribute to John F. Kennedy, as Mozart’s work communicates the same optimism and belief in man’s infinite progress to which President Kennedy dedicated his life. The spark of optimism which marked the Kennedy era, though dimmed, is still present among us because it is embedded in the very fabric of our nation from its founding.

Let us honor the memory of John Kennedy by not only reflecting on what was, and what could have been, but on how our culture has changed, and how we must now recommit ourselves to its renewal.

The Schiller Institute was founded in 1984 on the initiative of Helga Zepp-LaRouche, wife of the American statesman and physical economist Lyndon LaRouche, for the purpose of reviving the paradigm of Classical culture and reasserting the right of all humanity to material, moral, and intellectual progress. It is named after Friedrich Schiller, the “Poet of Freedom” whose ”Ode to Joy” is immortalized by Beethoven in his Ninth Symphony.