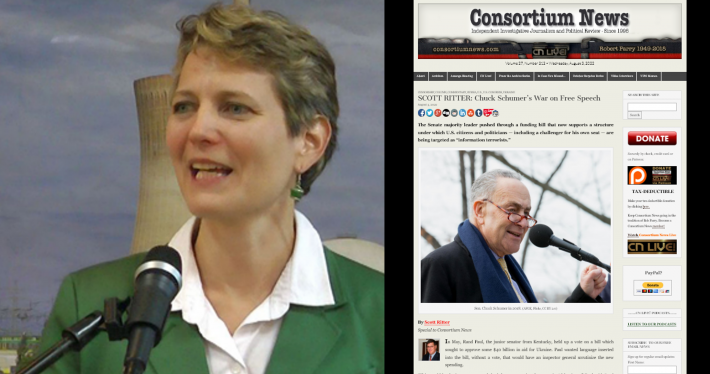 Aug. 3 (EIRNS)–Former UN weapons inspector Scott Ritter hit New York Sen. Chuck Schumer’s support for the Ukrainian Center for Countering Disinformation extremely hard in a commentary published by Consortium News today. In the process of doing so, Ritter prominently featured LaRouche candidate Diane Sare, Schumer’s opponent in this November’s election in New York and whose name is among those on the Kiev regime’s hit list. Ritter is also named on the Kiev hit list.

At the outset, Ritter noted Schumer’s attack on Kentucky Republican Sen. Rand Paul’s effort to include a provision for inspector general oversight of the $40 billion that the U.S. Congress voted up for Ukraine in May. Schumer argued that Paul’s actions served to “strengthen [Russian President Vladimir] Putin’s hand.”

“What Schumer didn’t say,” Ritter noted, “was that an inspector general, mandated to oversee how U.S. taxpayer money authorized under the bill in question (the Additional Supplemental Appropriations Act of 2022, which became Public Law 117-128 on May 21), would have exposed the role that U.S. funds played to exact political revenge on the man who tried to inject a modicum of accountability into how monies appropriated by Congress are spent, namely Rand Paul.” Rand Paul, Ritter reports, was labeled an “information terrorist” by acting director of the CCD Andriy Shapovalov, a Ukrainian civil servant whose salary was paid for by U.S. taxpayer monies, on July 14. The occasion of his July 14 remarks was a conference paid for by the U.S. Civil Research and Development Fund (CRDF Global Ukraine), “an ostensible nonprofit organization authorized by U.S. Congress to promote ‘international scientific and technical collaboration,’” Ritter wrote. “It is supported by the U.S. State Department, some of whose officials sat in attendance.”

“But there is more,” Ritter continued. That “more” is the successful petitioning campaign of Diane Sare–who Ritter correctly identifies as a “LaRouche candidate”–to get on the ballot in New York to challenge Schumer’s re-election. “Diane Sare was singled out by the Schumer-funded, State Department-supported Center for Countering Disinformation as an ‘information terrorist’ who should be prosecuted as a ‘war criminal’ because of her public stance challenging the narrative about the Ukraine conflict,” Ritter noted. “That’s right — Chuck Schumer helped create the organizational structures which have attacked the reputation of a challenger for his Senate seat, threatening her with political violence and more for the `crime’ of challenging Schumer on the issue of Ukraine.”

“What Chuck Schumer has done in using U.S. taxpayer money to attack his political opponents is un-American. One can only hope that the New York voters see it the same way come November,” Ritter concluded. “It also appears to be illegal. As such, I hope that both Rand Paul and Diane Sare pursue whatever legal recourse is available to them to expose and shut down a Schumer-supported law that allows U.S. taxpayer money to underwrite a campaign targeting U.S. citizens, including serving senators and political challengers, with intimidation and more for the ‘crime’ of exercising their First Amendment right of free speech.”