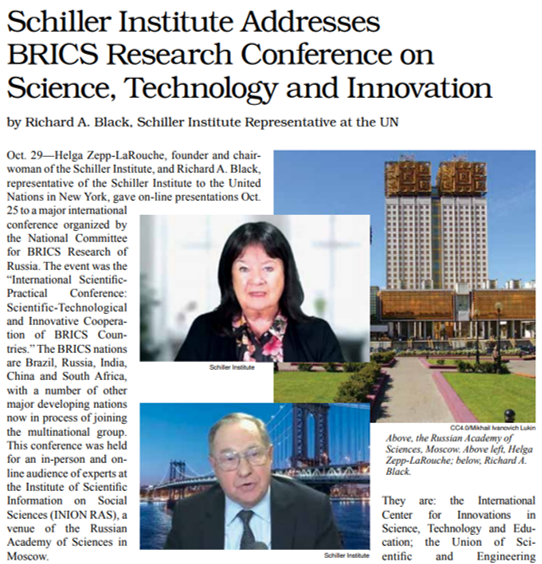 Nov. 26 (EIRNS)—Websites associated with Russia’s Institute for Scientific Information on Social Sciences of the Russian Academy of Sciences (INION RAS) have just published the address, titled, “Prospects for a Fusion Energy-Based Economy for the BRICS Nations and Partners,” by Richard A. Black of the Schiller Institute. The address was given at the Oct. 25-26 conference on “Scientific-Technological and Innovative Cooperation of BRICS Countries,” organized by the Russian National Committee on BRICS Research. The conference heard an address also on Oct. 25 by Helga Zepp-LaRouche on prospects and principles for a new international credit system, as designed by Lyndon LaRouche. The Russian websites which have published the paper are “Greater Eurasia: Development, Security, Cooperation” and “The Club of Subjects of Innovative and Technological Development.”  The INION of the Russian Academy of Sciences, which published the speech, is a section of the RAS. Taras Muranivsky, who headed the Schiller Institute in Moscow for many years until his death in 2000, was associated with that section of RAS, and Lyndon LaRouche had addressed it in 1994.