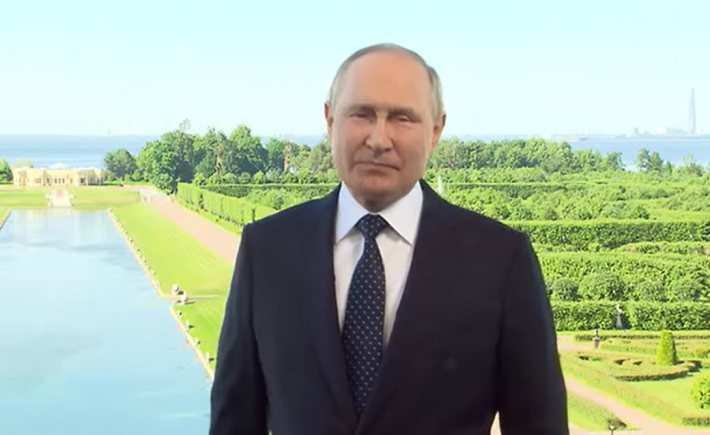 June 30, 2022 (EIRNS)—In a pre-recorded video message, Russian President Vladimir Putin addressed the Tenth St. Petersburg International Legal Forum today, contrasting the “generally accepted principles of international law and the UN Charter,” which underlie an emerging multipolar system of international relations, with the “unjust unipolar model” based on an “order based on rules and other questionable concepts which try to control and direct global processes at their own discretion.” The U.S. is guilty of such conduct, Putin asserted, unable to accept that it is losing its supremacy on the world stage, even while advocating its own exceptionalism.

Rejecting the notion put forward by some radicals, that international law is being dismantled, Putin admits that undoubtedly “the system of international law needs to be further developed, but we should not confuse cause and effect. Crises happen not because the law is faulty, but because of attempts to replace law with dictate,” or when certain states or groups of states try to replace international standards with their own national jurisdiction. This, he stated, “is a deliberate refusal to follow essential legal principles—justice, conscientiousness, equality and humanity. These are not just legal ideals, but values that reflect the diversity of our civilization.”

The Russian President warned that the multipolar world of the 21st Century “is an irreversible process; it is happening before our eyes…this democratic, more just world order should be built on the basis of mutual respect and trust, and, of course, on the generally accepted principles of international law and the UN Charter.” In this new, multipolar world, there is no room for discrimination against states or people. Russia, therefore, “speaks for the practical realization of the pivotal international legal principle of the sovereign equality of states and the right of each state to pursue its own development model. I am confident that by consistently following international law and joining our efforts, it is possible to resolve the most difficult problems that the world is facing and to provide for the stable, sustainable and progressive development of all states.”  Access to President Putin’s speech is here.