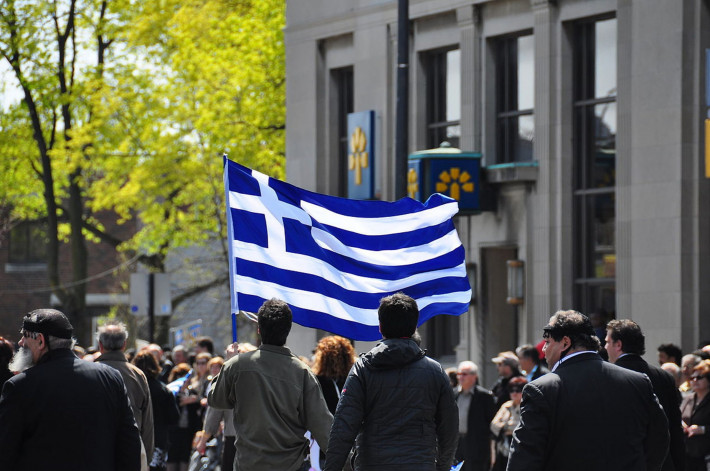 May 9, 2022 (EIRNS)—There is an open letter circulating in Greece addressed to the Greek government protesting its shamelessly pro-NATO policy on Ukraine. It has 159 signatures, including many university professors, retired diplomats, two former government ministers and a very high-ranking, recently retired General.

Entitled, “Protest the Attitude of the Political System and the Media on Ukraine,” they slam the unprecedented propaganda campaign the public has been subjected to.

“Although the situation in the war zone for the past eight years was a prelude to what we are experiencing today, although we have witnessed attacks by our allied countries on various fronts (Cyprus, Serbia, Iraq, Libya, Syria…), this is the first time that the attacker has been convicted, while the campaign has reached the limits of official racism. Ideological terrorism in the media is reminiscent of McCarthyism at its worst….”

It characterizes the “unbelievable” media campaign as “rampant barbarism that, among other things, demonizes the Russian leadership” and leads to a “self-manipulation of Europe, to its complete submission to U.S.-NATO plans, while the unthinkable possibility of a global nuclear catastrophe comes closer.”

Significantly, it contrasts “the Turkish counter-example of a balanced attitude” with the fact that the Greek government has “decided to destroy longstanding Greek-Russian relations, to be indifferent to the unknown fate of the Black Sea Hellenism, to endanger the energy and defense security of our homeland, to undermine even the peace in our country—not for Cyprus or but for a province of Ukraine, Donbass, defending at all costs a country that has never helped us!”

It concludes: “Those who understand the national interest of Greece and not in Euro-Atlantic terms, those who learned about war from Thucydides … and those who know who the real enemies of Greece are, feel that this government, by its attitude to the issue, offends them, poses a huge risk, and certainly does not represent them.” Among the noted signers are former Associate Minister of Finance Nadia Valavani, former Deputy Minister of National Defense Kostas Isychos, both of whom served in the previous government led by Syriza; Lt. Gen. Athanasios Tsouganatos, who retired in 2019, and Ambassador Ad Honorem Leonidas Chrysanthopoulos, who has also signed the Schiller Institute petition.