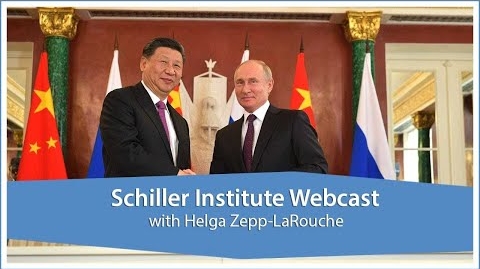 February 16, 2022by Anastasia Battle in General

Join the Schiller Institute Feb. 19 for an international conference

Though the strategic situation around Russia and NATO remains highly dangerous, Helga Zepp-LaRouche stated today that there has been a change. Putin succeeded in provoking a discussion about Russia’s security concerns, effectively making the case that one nation or bloc of nations must not improve its security at the expense of others. She noted forward motion in the meeting between German Chancellor Scholz and President Putin, even as Trans-Atlantic war hawks keep insisting that Russia may invade “any day.”

In reporting on a message from Ukrainian stateswoman Natalia Vitrenko, she said the situation in Ukraine remains very complicated, but the possibility of a Minsk-2, as part of a broader Helsinki 2.0 discussion, may enable a change in which Ukraine becomes a bridge between East and West, instead of a war zone. It is noteworthy that participants in the discussions at the end of the Cold War, former French Foreign Minister Dumas, and former U.S. Ambassador to Russia Matlock, have publicly intervened to “set the record straight” on the origin of the crisis, i.e., the broken promise from the West that no eastward expansion of NATO will occur, which reveals historic truth against the lying narratives coming from the Trans-Atlantic side.

She called on all viewers to join us in mobilizing to build the Schiller Institute conference this Saturday, February 19, so that it will become clear there is an alternative to the economic collapse behind the war drive, and that is the unique set of solutions generated by Lyndon LaRouche.