Video: “Focus on What Unites Us Rather than Divides” — Ambassador Dmitry Polyanskiy 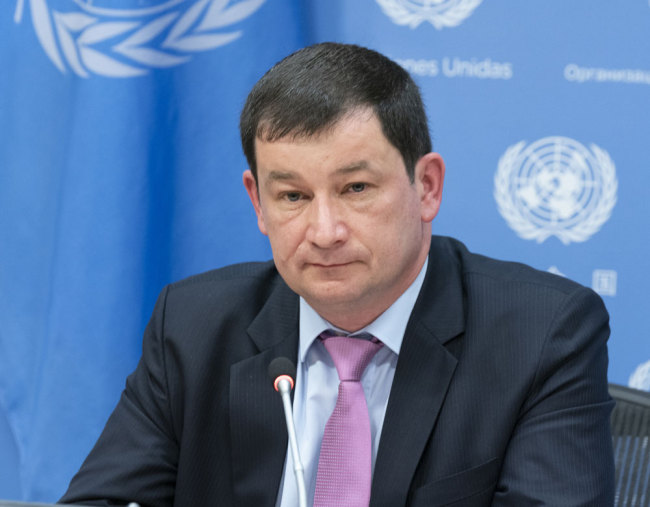 Video: “Focus on What Unites Us Rather than Divides” — Ambassador Dmitry Polyanskiy

Dear Colleagues, my name is Dmitry Polyanskiy. I am the First Deputy Permanent Representative of Russia to the UN. I would like to thank the Schiller Institute and Mrs. Helga Zepp-LaRouche for inviting me to speak at today’s conference.

The news about our proposal for security guarantees and the negotiations with the West are hitting the headlines, so, you can hardly imagine a more timely topic these days. I appreciate this opportunity to share my views from our perspective.

I would like to start on a cautiously optimistic note. Our dialogue with the U.S., NATO, and the OSCE [Organization for Security and Co-operation in Europe] is ongoing. As I speak now, our Foreign Minister [Sergey Lavrov] is meeting with U.S. Secretary of State [Antony] Blinken in Geneva as a follow-up to earlier contacts in January. So, we meet, and we talk. I don’t have any doubt that this is a kind of positive development compared to the stalemates we used to be in for the past few years. The value of these contacts should not be underestimated. Some time ago, that could even be viewed as the result itself. However, the reality is that those times have passed. Talking clearly is not enough now, with all “gentlemen’s agreements” repeatedly violated by our Western counterparts. Our national security interests are faced with a direct threat, as the NATO countries [carry out a] military build-up around our borders.

Therefore, this time we do not expect lengthy discussions, but rather, a very concrete response from our Western colleagues with regard to the proposals on security guarantees we put on the table. As you know, last December, we passed to the U.S. side two drafts: a Russia-U.S. treaty on security guarantees, and an agreement on measures to ensure the security of Russia and members of NATO.

The ideas in these drafts do not come out of thin air. They are based on previous agreements, including those of the OSCE summits in Istanbul in 1999 and in Astana in 2010, stating that the OSCE members will not strengthen their own security at the expense of the others. No state, no group of countries or organizations can be vested with primary responsibility for maintaining peace and stability in Europe. This is an integral part of the compromises and decisions made at the highest level in the OSCE, and our Western counterparts must fulfill their part of these obligations.

In a nutshell, we seek written, legally binding, ironclad guarantees for the following: That NATO will not expand eastward; that no assault weaponry will be deployed close to Russian territory; that the military infrastructure in Europe will be brought back to the parameters prescribed in the 1997 Foundation Acts between Russia and NATO. These are our red lines, and our colleagues in the West are well aware of that. We expect to receive, as soon as possible, written, clause-by-clause comments to our proposal for these strategic initiatives, not to get bogged down in endless and fruitless discussions.

Unfortunately, our Western colleagues are trying to scale down the whole issue to Ukraine. It seems at times that they are, in a way, self-hypnotized with an imminent threat of the Russian invasion. It is something irrational, you know—self-inflicted phobias, something to be discussed in therapy, rather than in a serious political circle.

It also seems that our Western colleagues are blinded by the so-called “victory” in the Cold War, and continue to live these memories, and try to talk from the position of superiority, and impose double standards. They blame us for the presence and movement of our troops on our own sovereign territory, while claiming that everything they do on NATO territory is nobody’s business.

This will no longer work. On the destabilizing activity: this is exactly what the West is doing in Ukraine, sending more and more weapons and troops there, spurring its militarization. Instead of encouraging Kiev to comply with the Minsk package of matters, and its other international obligations, our Western partners encourage Kiev’s bloodthirsty looks to Donbas, since it sees Western so-called “assistance” as a carte blanche. The year has only started, but according to the OSCE’s special monitoring mission, the number of ceasefire violations has already exceeded 3,000.

But the real problem is way bigger than Ukraine. The whole architecture of regional security in Europe is almost ruined. The situation is escalating, and contrary to the Western narrative, all threats come from the West, rather than Russia. They, on a daily basis, try to intimidate us by sanctions, grave consequences, you just name it. It is not something new. Russia has been resisting various threats for centuries. So, we learned how to handle this. I hope our Western colleagues will be good students of history as well.

We should not repeat the mistakes of the past, and we still have a chance to focus on what unites us rather than divides.

I wish your conference success, and fruitful continuation of your work. Thank you very much.