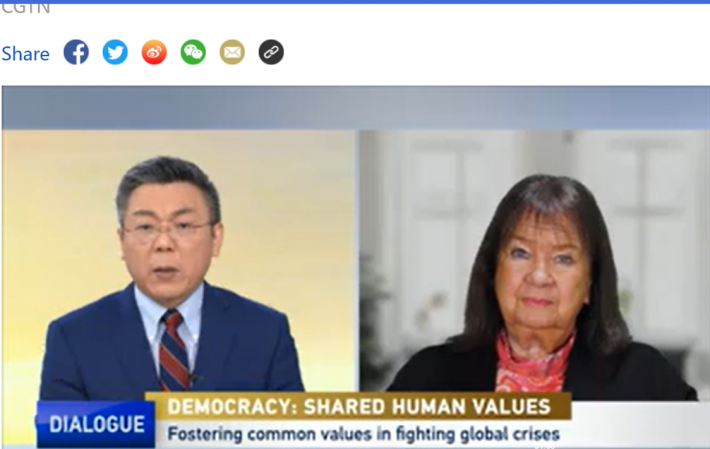 Dec. 5 (EIRNS)—On Sunday, Dec. 5, Schiller Institute founder Helga Zepp-LaRouche joined a special hour-long episode of the CGTN program “Dialogue: Ideas Matter,” with host Xu Qinduo to discuss the concept of “democracy.” This is part of an assertive and confident push by China to challenge the absurd “Democracy Summit” hosted at the end of the week by the United States.

Xu put the first question to Helga Zepp-LaRouche: what does democracy mean? Zepp-LaRouche pointed out that democracy wasn’t necessarily considered a good thing by Plato, to whom it was the other side of the coin of tyranny. Beyond the use of the term, it is essential to look at what governments do. Open-minded people considering China’s approach to democracy will recognize that it has advantages not present among the “Western” democracies.

Martin Sieff, with the Global Policy Institute spoke next, emphasizing that there does not exist a single form of democracy in the world. Social democracies, Japan, India, the United States—these are different types of democracies.

Politburo member Huang Kunming appeared next, in the form of a clip from a recent speech. He reminded his audience that the Communist Party of China arose in the pursuit of democracy to replace the old feudal order, and it continues to lead the fight for Chinese democracy. This phrase itself means that people are the rulers, and the purpose of government. And there is no one-size-fits-all approach to democracy. Indeed, having such a view is itself undemocratic. Allow the people of each nation to decide.

The next guest, Dr. Wang Huiyao, a member of the China State Council, discussed what is meant by “whole process people’s democracy.” There is a consultative democracy, whereby suggestions and criticisms from across the country are considered. The selection and election process itself is designed to ensure that the people best able to serve the people take office. The powerful development and social development of China vindicates its approach.

Michele Geraci, of Italy, agreed that the point of government is to achieve results, to provide for the people (unlike a feudal system). He contrasted process-democracy with results-oriented democracy. Which system delivers better results for the people; results that people will be happy with?

Following a clip in which the head of China Media Group asked whether the people of Afghanistan benefitted from American democracy, and whether George Floyd benefitted from democracy, Zepp-LaRouche was asked whether the police reflect the will of the people. She pointed out that the militarization of the police over decades has created problems, and that the people of the United States are extremely polarized. Biden said he’d unify the country. But the only way to bring about a unity is to collaborate on a worthwhile mission, as did the Founders, Lincoln, FDR, and JFK. Afghanistan represents the enormous failure of attempting to impose a model on another country. And the theft and withdrawal of financial and other resources from that nation is a terrible crime.

The Syrian Ambassador to the P.R.C., Imad Moustapha, spoke up to say that the United States is in no position to be the cardinal arbiter of what democracy is, or to declare whether another nation’s system is democratic. The United States is truly a single party state, ruled by the rich, which cynically uses the terms “democracy” and “freedom” to justify its policies.

Must the concept of “democracy” itself be updated to be more relevant to the modern, connected world, asked the host. Michele Geraci compared the cartelized control of social media to the feudal order in which individual rulers could make decisions, rather than a government that is answerable to the general welfare.

Sergey Shakhray, former Deputy Prime Minister of Russia, spoke in the form of a video clip, to say that by creating a division line between democracies and autocracies ignores the actual outcomes provided by China and many Western nations. Former Japanese Prime Minister Hatoyama also spoke to the need to look for commonalities with other nations, rather than focusing on differences.

Zepp-LaRouche responded that it was absolutely necessary to seek out shared interests. A dialogue of cultures can best proceed by seeking out the best aspects of other countries and cultures. She took on the descent into broadly expressed anti-Americanism that had entered the discussion to point to the powerful historical successes of European culture. The Italian Renaissance was based on the idea of man as a limitlessly perfectible being. The problem in the West is not that we did not have a great tradition, but that we moved away from it to a liberal outlook in which everything is allowed, creating a decadence of culture. “To focus on the common aims of mankind, we must appeal to the best traditions of each culture.” Zepp-LaRouche called for joining together to achieve modern health care in every nation, with a particular focus on Operation Ibn Sina to begin with Afghanistan, which is in such great need, along with such countries as Haiti, Yemen and Syria. Building health infrastructure goes hand in hand with overall development, both requiring and enabling it.

The common aims of mankind should be more clearly defined, and present conditions provide the opportunity for a breakthrough. Contrast the inflation of the trans-Atlantic with the physical economic growth typified by the Belt and Road Initiative. {The full Dialogue can be accessed here.}

The broadcast reflected China’s confident efforts to undermine the “Democracy Summit” and the need for a greater understanding in China of the history of and fights within extended European civilization, including, emphatically, the United States.