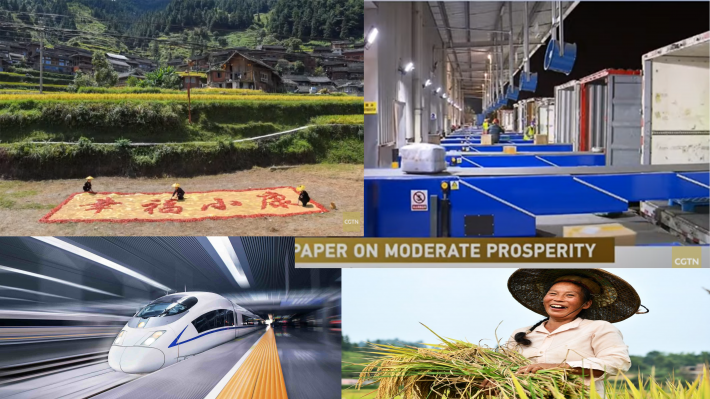 Sept. 28, 2021 (EIRNS)—“China’s Epic Journey from Poverty to Prosperity,” in English a 72-page white paper, was released today by China’s State Council Information Office, giving their account as to how they were able to pull 770 million people out of deep rural poverty and to build the world’s largest social security system. Portions of it were summarized by Global Times.

The achievement of “moderate prosperity” (xiaokang) was achieved by attacking the biggest weakness of the society, the vast rural poverty. With a national mission, a strong central government, and a willingness to invest in projects that made sense over time, though they may not turn a profit overnight, they accomplished the work. And in doing so, they claim that the achievement not only helped China but contributes to peace and development, and so is the foundation for common prosperity. It is now the basis for China’s interaction with the rest of the world, centered around the offer of the Belt & Road.

With the profound experience of accomplishing a worthwhile national goal, China’s leader have their eyes on another 30-year goal: By mid-century, they mean to go beyond “xiaokang” to become “prosperous, strong, democratic, culturally advanced, harmonious and beautiful.” (That’s correct—“beautiful” is a key part of the mission task!) Midway, the 2035 goal includes a per-capita GDP of at least $20,000 (the World Bank standard of ‘moderately developed’). Global Times on Tuesday interviewed several key players in developing the intermediate 2035 goal. The former vice director of the Beijing Economic Operation Association, Tian Yun, identified rural revitalization as the key for the 2035 goal, and vital rural-urban connectivity. Urban jobs were necessary for converting migrant workers to the economic and cultural benefits of cities. So, modernization and industrialization are actually the road for rural revitalization. As the director of the China Agriculture Industry Chamber of Commerce, Sun Wenhua further developed the point: China has accelerated a new type of relationship between industry and agriculture, including efficient transportation infrastructure systems, and the two-way flow of goods and peoples. Finally, Bai Wenxi, chief economist of Interpublic Group of Companies, is cited: “To narrow the wealth gap and tackle imbalance development, China has a strong central government, which has the power of mobilization, and all levels of local governments are empowered by the staunch ability of implementation, and those are what makes China [able] to mobilize the whole country to achieve its goals, to make great progress.” His example made the point: The sending of experts to rural areas to assist in the assimilation and mastery of new technologies of production was a key expenditure of manpower and talent, although, “Those policies won’t have visible economic benefits in the short term.” But they are necessary, and it’s the role of strong centralized leadership that can make such long-term commitments work.