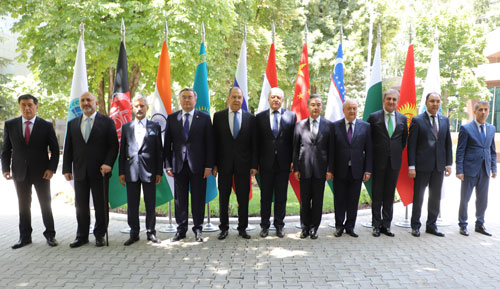 July 16 (EIRNS)—There continued to be a flurry of diplomatic activity around the Shanghai Cooperation Organization (SCO) ministerial and SCO Afghanistan Contact Group, which met July 13-14 in Dushanbe, Tajikistan. Before heading to Dushanbe, on July 12-13, Chinese State Councilor and Foreign Minister Wang Yi stopped in Ashgabat to meet with Turkmenistan President Gurbanguly Berdymukhamedov and other officials. China’s Foreign Ministry reported that during the meeting Wang Yi said, “the two countries should sign as soon as possible documents on the alignment of the China-proposed Belt and Road Initiative with Turkmenistan’s  development strategy to revive the Great Silk Road,” and  formulate a five-year plan for all-round cooperation.” This included China’s “cooperation  with Turkmenistan across the whole industrial chain of oil and gas.” On July 15-16, after the SCO conferences, Pakistan Prime Minister Imran Khan travelled to Uzbekistan, to meet with President Shavkat  Mirziyoyev.

The two leaders discussed cooperation in fighting COVID-19. Their “Joint Declaration on the Establishment of Strategic Partnership between The Republic of Uzbekistan and the Islamic Republic of Pakistan” emphasized: “The leaders stressed the importance of regional integration and connectivity as a cornerstone of economic development and progress. In this regard, they welcomed the exchange of high-level visits in the areas of trade, railways, transport and aviation.

“The two leaders reiterated their support for the Termez-Mazar-i-Sharif-Kabul-Peshawar railway project as an important initiative to create a rail link from Central Asia to the Arabian Sea through Afghanistan and the Pakistani seaports of Karachi, Gwadar and Bin Qasim….

“The two leaders also recognized the immense potential of the China-Pakistan Economic Corridor for the benefit of the entire Central Asianregion and beyond entailing greater connectivity and trade linkages through a network of transport, fiber optic cable, energy pipelines, and investment opportunities in its SEZs [Special Economic Zones].”