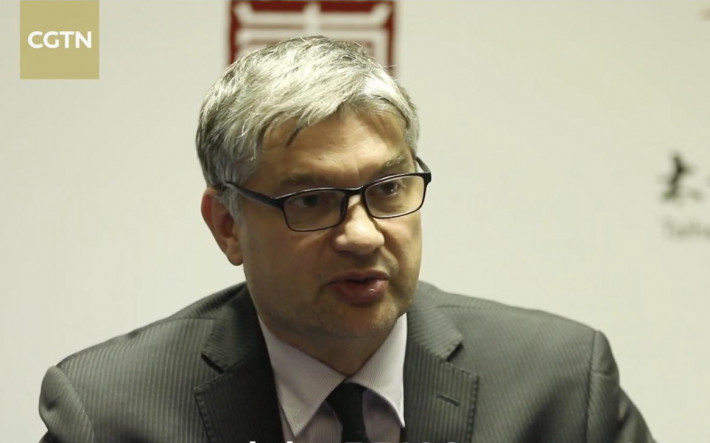 July 13, 2021 (EIRNS)—Global Times yesterday published an interview with Alexander Lukin, head of the Department of International Relations at the Higher School of Economics and director of the Center for East Asian and SCO Studies at the Moscow State Institute of International Relations. In a brief editorial note at the beginning, GT notes that China and Russia have witnessed stronger ties, especially given the US’s continued pursuit of ideological confrontation in the world. The question to be addressed is, “How will the trilateral relations among China, Russia, and the US develop and shape the world?”

The interview is extensive, covering a wide range of topics within the China-Russia relationship, but particularly notable is the matter of geopolitics, which the GT interviewers introduced by citing Zbigniew Brzezinski’s “The Grand Chessboard,” in which he warned “that potentially, the most dangerous scenario [for the United States] would be a grand coalition of China, Russia, and perhaps Iran, an ‘anti-hegemonic’ coalition united not by ideology but by complementary grievances [toward the United States].”

“This line of thought agrees that basically the main task of American policy in the new Eurasia should be avoiding the emergence of a single power or alliance of powers hostile to American interests that would control the Eurasian space,” Lukin replied. “This idea has a very long history. In the first half of the 20th century, many Western experts, beginning with the founders of geopolitics, Halford Mackinder and Nicholas John Spykman, said that control over Eurasia was very important. If an anti-Western force gains control over Eurasia, it would be very dangerous for the US and Western Europe.”

Lukin argues that after the fall of the Soviet Union, the US became “too proud” of itself and overestimated its influence in the world. “However, the collapse of the Soviet Union did not stop the general tendencies of world history, including in international relations in many countries which contributed to their becoming stronger, like China, India, Brazil, and others,” he said. “Russia also reemerged as a strong power. India and several other countries also became stronger. But American politicians did not want to see this trend. They thought that they could still control the entire world and punish those who did not conform to their position. Their policy of pressure and containment has only stimulated the coordination between Russia and China, and made their strategic partnerships stronger.”

Compared to Kissinger and Brzezinski, says Lukin, American politicians today don’t really know what they are doing. “Trump wanted to improve relations with Russia, but he could not for domestic reasons,” Lukin continued. “Now you see some articles written by influential American experts, who seem to begin to understand that Russian-Chinese rapprochement is a kind of problem for the US. But they still don’t know what to do about it. They are discussing how to break the Russia-China de facto alliance without giving either Russia or China anything. So that’s also not a very smart position, I would say. They are not going to get anything for nothing. I don’t think they can.

“Contrary to what they might believe, they cannot break our strategic partnership, because it’s based on Russia and China’s national interests.” Full interview is here.