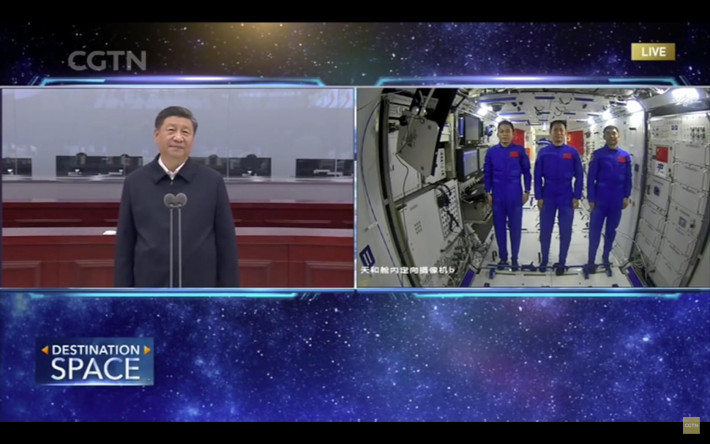 June 22 – President Xi Jinping went to the Beijing Aerospace Control Center to speak with the three astronauts on the Tianhe module of the Chinese Space Station. “How are you doing?” he asked. “And is everybody healthy?” Major General Nie Haisheng, the 57-year old commander of the mission, replied that they were all doing well. “This is my third space mission. I work and live in Tianhe, and the conditions are getting better and better. Now we have a permanent home operating in orbit, and we are proud of our great Party and motherland,” said Nie.

Nie came from a poor family in the then drought-ridden portion of Hubei province. He had eight siblings and sometimes had to wear some of his sister’s flowery clothes to school, and took a terrible ribbing from his classmates for that. He was known, however, as the “king of mathematics” and although he almost had to leave middle school to go to work when his father died, one of his teachers saw to it that he could stay in school and that the tuition would be waived. Tang Hongbo, the youngest of the three was on his first venture in space, said that he was happy that he could have a video talk with his parents while at the station. “Our home in space is very cozy and comfortable, and we have full confidence in completing the upcoming tasks,” said Tang.

Xi said he was delighted to learn that the astronauts were in good condition and that their work was progressing smoothly. “The construction of the space station is a milestone in China’s space industry, which will make pioneering contributions to the peaceful use of space by humanity,” said Xi. You are the first astronauts stationed in the core module Tianhe and will stay in space for three months,” Xi said during the video call. “We all care about you very much.”