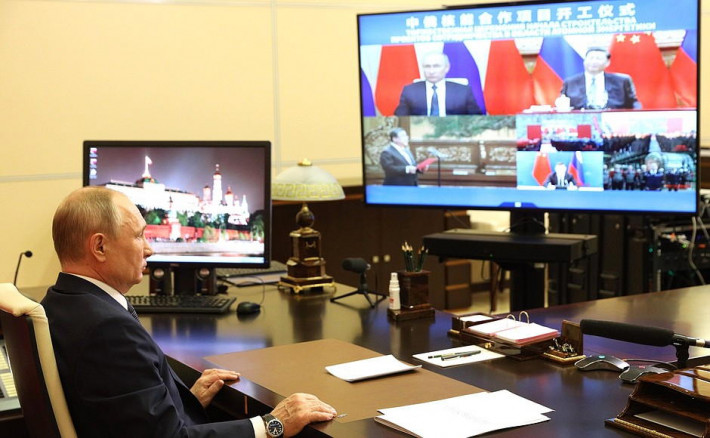 May 20, 2021 (EIRNS) – The presidents of Russia and China, Vladimir Putin and Xi Jinping, both participated in a videoconference hookup yesterday to launch the beginning of construction of four new nuclear plants in China, based on Russian technology. These are two units each at the Tianwan nuclear power plant in the city of Lianyungang, and at the Xudapu nuclear plant in Huludao district in northeastern China.

The two presidents chose to make this a major policy-shaping occasion for their two countries, as well as one globally focused on the role of innovation and scientific and technological cooperation in achieving development. “It is necessary to strive for innovation-based development and to strengthen scientific and technical cooperation in the nuclear sphere,” Xi Jinping stated, reiterating that the two countries had agreed “to make a sizable intellectual contribution to the innovation-driven development of the global nuclear sphere.” The Chinese president asserted that “our countries have been providing each other with solid support and have been engaged in close and effective cooperation” in many areas, and that “energy has always been the biggest and most successful branch in our practical cooperation while nuclear energy cooperation has been its strategic priority. We are jointly upgrading our cooperation in this area and have already put into operation a host of major projects.”

Through their joint work, Russia and China will “make a sizable contribution to the global development of nuclear energy,” Xi stated.

Putin responded by effusively greeting “President Xi Jinping, my dear friend,” emphasizing that “Russian and Chinese specialists are working on this flagship joint project which is truly a milestone. They are building powerful, modern Russian-designed nuclear reactors that meet all safety and environmental standards. It is planned that they will start operating as soon as in 2026–2028, which, as President Xi just said, will be a solid contribution to China’s energy security.”

Putin emphasized “Russia’s unique high technology capabilities in industrial production,” adding that “President Xi and I determined the main areas of our genuinely close partnership, the cooperation between Russia and China on nuclear technology, during my state visit to China in 2018… It can be said that Russia-China relations have reached their highest level in history.”

The Russian President then stated: “Returning to the topic of nuclear energy cooperation, I would like to note, with great satisfaction, that all the agreements reached at the highest level are being consistently and unfailingly fulfilled. In addition to the construction of new power units at the Tianwan and Xudapu nuclear power plants, there are many other large Russian-Chinese initiatives that have been and are being implemented. These initiatives include an experimental fast neutron reactor built in China with Russia’s participation… Russia also supplied China with radionuclide heating blocks for the spacecraft that was the first in history to land on the far side of the Moon in 2019. We were extremely happy about your success, dear Chinese friends.”

“I am convinced that Russia and China will have many more ambitious and successful projects together. We are ready to develop our cooperation in the construction of nuclear power plants, and innovative partnership in the development and implementation of low-carbon and other technologies.”