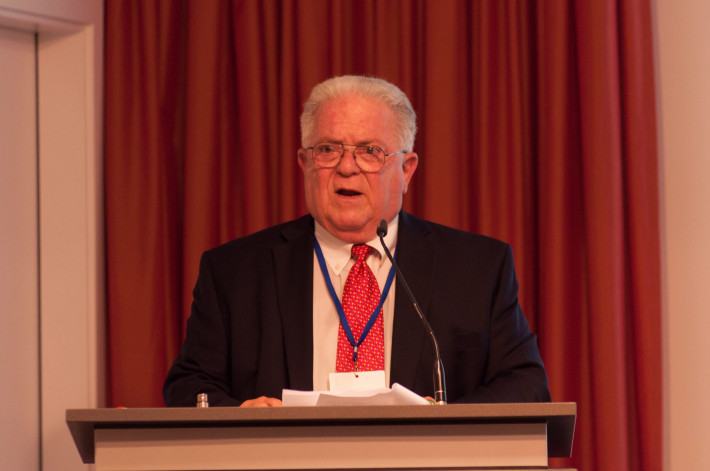 April 21 (EIRNS)—Chas Freeman, a former Defense official and diplomat with extensive knowledge of China-U.S. relations, issued a strong warning to the U.S. on the deterioration of relations between the two superpowers in an April 15 speech to the University of Idaho. He noted: “China is now in some ways more connected internationally than the United States. It is the largest foreign trade partner of most of the world’s economies, including the world’s largest—the European Union (EU). Its preeminence in global trade and investment flows is growing. The 700,000 Chinese students now enrolled in degree programs abroad dwarf the less than 60,000 students from the United States doing the same. American universities still attract over one million foreign students annually but nearly half a million international students now opt to study in China. China’s role in global science and technological innovation is growing, while America’s is slipping.

On militarily matters, he says the U.S. “containment” of China in the past, especially regarding Taiwan, was based on an overwhelming advantage on the U.S. side. This containment prevented China from “effectively asserting ancient claims to islands in its near seas, while opening the way for other claimants to occupy them.” Now, however, “the Chinese military can now defend their country against any conceivable foreign attack. They also appear to be capable of taking Taiwan over American opposition—even if only at tremendous cost to themselves, Taiwan, and the United States.” The U.S. military presence in the region today, Freeman said, “has the effect of backing and bolstering Taiwan’s refusal to talk about—still less negotiate—a relationship with the rest of China that might meet the minimal requirements of Chinese nationalism and thereby perpetuate peace.”

As to the U.S. rallying its “friends and allies” to join in opposing China, “it will discover that few of them share the all-out animus against China to which so many Americans have become committed….

On the BRI, Freeman makes the interesting point: “The Greeks invented the concept of a ‘Europe’ distinct from what they called ‘Asia.’ Chinese connectivity programs (the ‘Belt and Road’) are recreating a single ‘Eurasia.’ Many countries in that vast expanse see an increasingly wealthy and powerful China as an ineluctable part of their own future and prosperity. Some seem more worried about collateral damage from aggressive actions by the United States than about great Han chauvinism. Few find the injustices of contemporary Chinese authoritarianism attractive, but fewer still are inclined to bandwagon with the United States against China….”

He notes China’s major advances in science and education, compared to the U.S., which is in “chronic fiscal deficit, immobilized by political gridlock, and mired in never-ending wars that divert funds needed for domestic rejuvenation to preeminence in global science, technology, and education.” The foolish U.S. move of “excluding Beijing from international cooperation in space (has) led to an increasingly robust set of indigenous Chinese space-based capabilities, many of which are of military relevance.

On U.S. sanctions, he adds: “It is generating an active threat to the U.S. dollar’s seven-decade-long command of international trade settlement. Increased use of other currencies menaces both the efficacy of U.S. sanctions and the continued exemption of the American economy from balance of trade and payments constraints that affect other countries…. The domestic and foreign purchasers of U.S. government debt could conclude that it is backed by little more than ‘modern monetary theory’ and cease to buy it. This alone would end the ‘exorbitant privilege’ of the United States, deprive Washington of the ability to enforce unilateral sanctions, and make the American dominance of the Indo-Pacific economically unsustainable.”

There is much more; a full transcript of Freeman’s speech is here.