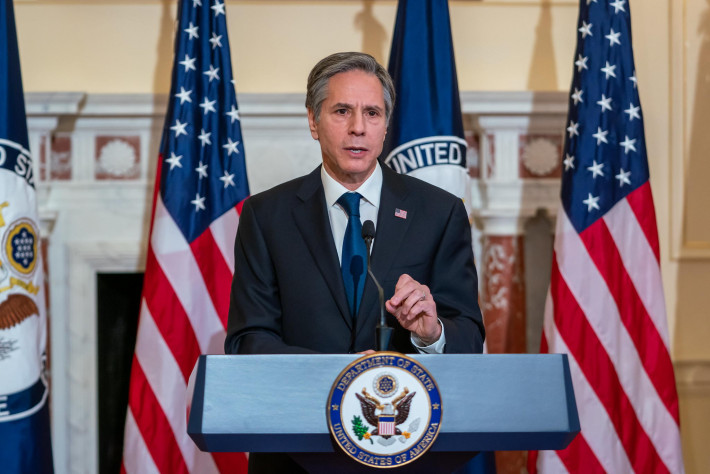 March 30, 2021 (EIRNS)–The UN Security Council held its monthly meeting on Syria yesterday, focusing heavily on the humanitarian situation. U.S. Secretary of State Antony Blinken, who chaired the virtual meeting, delivered a statement about the worsening humanitarian situation in Syria without once referring to the economic sanctions that the US and its European allies have imposed on the country that have worsened living conditions for millions of Syrians. “While today’s session is focused on the humanitarian crisis in Syria, it’s important to note that the only long-term solution to this suffering is through a political settlement and permanent resolution to the conflict, as outlined in UN Security Council Resolution 2254,” Blinken said, “But even as we work to that solution, we can’t lose sight of the urgent needs of the Syrian people that we’ve heard described so eloquently today. It’s clear that these needs – including having enough to eat and access to essential medicine – are not going to be met by the Assad regime.”

Blinken followed this posturing with the demand that the UNSC authorize the opening of two border crossings in the northeast and northwest into areas of the country that are not under the control of the government. “We have a responsibility to ensure Syrians have access to lifesaving assistance, no matter where they live,” he said. “Given that goal, there was no good reason at the time for the council’s failure to reauthorize these two humanitarian crossings.”

Russian Deputy Foreign Minister Sergei Vershinin, who delivered the Russian response, minced no words about the roles of the US and Turkish occupying forces in creating the current conditions that prevail in all parts of Syria. “It is paradoxical, yet true — a significant deterioration in the life of the Syrian population has been observed precisely within the past year, when a significant reduction in violence was achieved on the ground,” Vershinin stressed, reported TASS. He also drew attention to the fact that “the most difficult situation is developing in the regions not under the control of Damascus in the northwest, north and northeast of Syria, the responsibility for which, let me reiterate, is with the de-facto occupying countries and local authorities.”

Vershinin accused Western powers of openly discriminating against the areas of the country controlled by Damascus, including with respect to deliveries of humanitarian supplies, the return of refugees, and efforts to control the COVID19 pandemic. “It is done in a bid to undermine Syria’s sovereignty and territorial integrity, due to political motives,” he said.

Then there’s the matter of unilateral US and European sanctions, which are greatly hindering the economic reconstruction of Syria. “The reaction of Washington and Brussels to the call of the UN secretary general to ease and lift unilateral sanctions amid the coronavirus pandemic was, on the contrary, to tighten in an unprecedented way the restrictions adopted bypassing the UN Security Council, including the introduction of the infamous Caesar Act in June 2020,” Vershinin said. “Unfortunately, the honorable representative of the US and other Western colleagues spoke about a lot of things in today’s speeches but for the US and EU sanctions and their dramatic negative effect on ordinary Syrians.”

Vershinin also pointed out the US looting of Syrian oil and wheat. “Reports continue to come in that American convoys are trucking out oil and grain from Syria to Iraq daily. The information [we] receive suggests that 300 oil tank trucks and more than 200 cargo trucks with grain had crossed the Syrian-Iraqi border by March 23 since the beginning of the month,” he said. “It turns out while Syrians are suffering from acute shortage of basic products, including bread and petrol, a wide stream of Syria’s smuggled natural resources is flowing from the Trans-Euphrates region controlled by the US, while the country is simultaneously suffocated with unilateral sanctions which essentially are a form of collective punishment,” he underlined.

Prior to the US and Russian (and other) statements, UN Under-Secretary-General for Humanitarian Affairs Mark Lowcock reported that the need for aid has jumped 20% from last year and humanitarian organizations coordinated by the U.N. are seeking an estimated $4.2 billion to reach 12.3 million Syrians inside the country. He said another $5.8 billion is required for support to countries hosting Syrian refugees in the region. “We need more money, not less, if we are to avoid a further deterioration — the consequences of which could be dramatic and widespread,” Lowcock said.

Henrietta Fore, head of the U.N. children’s agency, UNICEF, said Syria’s worst economic crisis is “plunging 90% of the population into poverty, and across the country nearly 90% of children now require humanitarian assistance.”