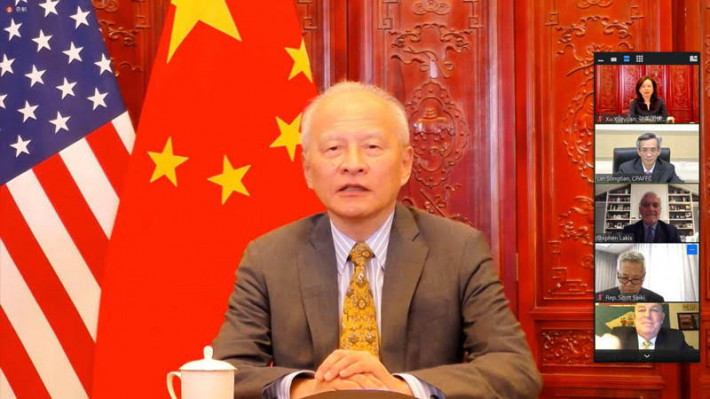 March 4, 2021 (EIRNS)–The 5th China-U.S. Sub-national Legislatures Cooperation Forum met online on March 2. Attending were state legislators from the states of Alabama, Hawaii, California, Delaware, Iowa, Michigan, and Tennessee. On the Chinese side were leaders of the standing committees of provincial or municipal people’s congresses of Beijing, Hebei, Shanxi, Jiangsu, Hubei, Guangdong and Yunnan. The forum was the outcome of President Xi’s state visit to the United States in 2015.

During the course of the Forum, the two sides had extensive discussions on the theme of “Win-win Cooperation for a New Chapter.” The U.S. legislators’ organization participating in the meeting is the State Legislative Leaders Foundation, whose president is Stephen Lakis.

China’s Ambassador to the U.S. Cui Tiankai addressed the group. He  underlined that this was the first such event since the change of administrations, and he emphasized the importance of U.S.-China cooperation, particularly in a year in which the world is still in a major fight against COVID-19. Cui referred to the call that the two presidents had made in February as the possible beginning of an improved relationship between the two countries.
“A China-U.S. relationship based on coordination, cooperation, and stability is both in the fundamental interests of the two peoples, and meets the shared aspiration of the international community,” he said. “The two countries need to work together under the principle of no conflict, no confrontation, mutual respect, and win-win cooperation, focusing on cooperation and managing differences, to promote the healthy and stable development of China-U.S. relations, to bring more tangible benefits to the two peoples, and contribute to peace and development of humanity.”