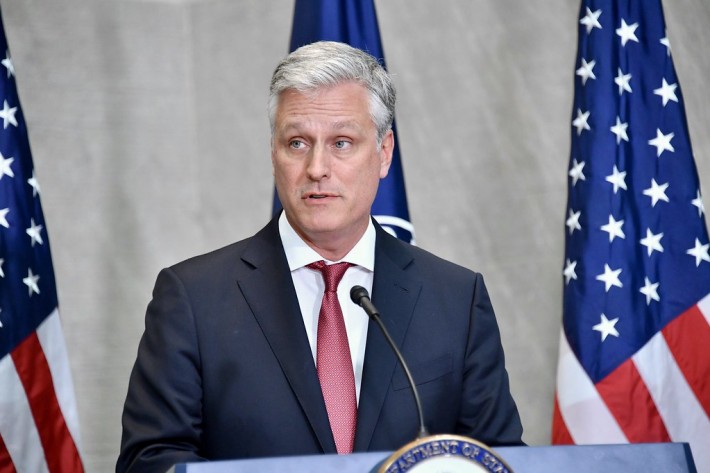 Robert O’Brien, President Trump’s National Security Adviser, and Matthew Pottinger, the Deputy National Security Adviser, traveled to Paris on Monday for a three-day trip to meet with European officials on China and other foreign policy issues, according to {Politico}. The meetings were to draw in security and foreign policy officials from the United Kingdom, France, Germany and Italy, and overlap a European foreign ministers meeting Monday. From the U.S. side, the discussion on China was to be presented by Pottinger, including on Huawei. After individual meetings on Monday, O’Brien and Pottinger will meet in a group with the European officials on Tuesday and Wednesday. “Ambassador O’Brien looks forward to conducting in-depth meetings in Paris this week with his counterparts from France, UK, Germany and Italy to address a range of national security challenges including China, 5G, Russia, Afghanistan, Middle East/North Africa and Covid response and recovery,” said NSC spokesman John Ullyot.

O’Brien had an op-ed published Monday morning, “Trump will continue to punish China for its horrifying anti-Uighur campaign,” continuing the worst name-calling and blame escalation of which Secretary of State Mike Pompeo and the Caesars of the Senate have been capable. The op-ed was characterized by this line: “According to recent reports by the Associated Press and the Jamestown Foundation, the CCP is using forced birth control…” etc. These, apparently, are the intelligence sources available to the National Security Advisor. He otherwise claimed that the 1950s Great Leap Forward, the Cultural Revolution, Tiananmen Square, and the Hong Kong security law are a chain of linked and closely related events.

China’s {Global Times} made clear its view of these events. The U.S. has failed in its attempts to enlist the European Union countries in an effort to sanction and cut trade with China, the lead unsigned editorial in {Global Times} July 12 stated:  the U.S. has “not achieved what it wished in its attempts to rope in the European Union against China.”. The editorial cites German Energy Minister Petr Altmaier’s statement to the Frankfurter Allgemeine Zeitung, “It has always been the policy of the Western international community, including the EU, that international trade relations cannot be based solely on how democratic a country is,” noting Germany is “not the world’s headteacher of morality.” Germany took over the EU’s rotating six-month presidency July 1.

While the U.S. and EU are allies with solid bonds, {Global Times} says, “Anyone who believes the U.S. can woo Europe to confront China like it confronted the former Soviet Union will be utterly wrong.”

The world has changed, says {Global Times}: “Now economic security is most vital for Europe. Military security is still important, but Europe is rarely threatened militarily—it is more than absurd to call China a security threat to Europe. Since China provides `irreplaceable market resources for Europe,´ decoupling  from China goes completely against Europe’s interests.  The U.S. “not only suppresses China, but also squeezes Germany’s economic development; the U.S. allows no competition and is “puffed up with arrogance.” U.S. attempts to woo other countries on dealing with China will “fall flat. Some countries play “flip-flop.”