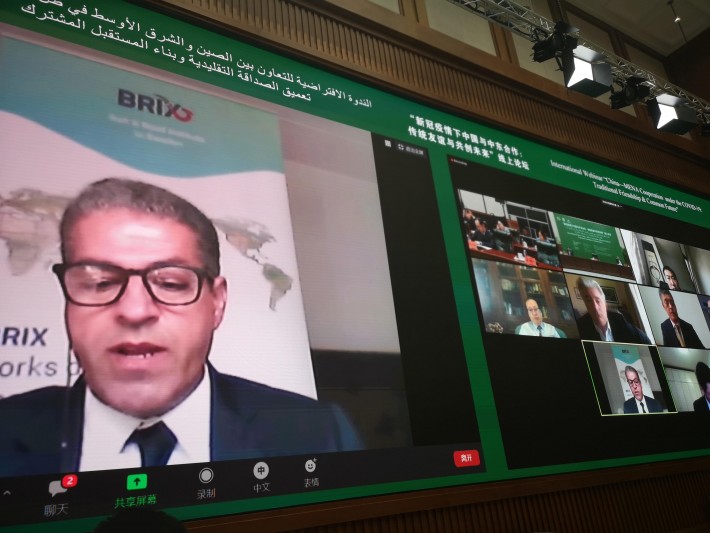 Schiller Institute Southwest Asia Coordinator Hussein Askary addressed a high-level China-Arab webinar organized by the Chinese Academy of Social Sciences (CASS) on Friday, July 10. The event’s title was “International Webinar: China-MENA Cooperation Under the COVID-19: Traditional Friendship & Common Future” (MENA: Middle East and North Africa). The speakers included the top leadership of CASS and keynote speakers were Prince Turki bin Faisal bin Abdul-Aziz (Chairman of King Faisal Research Institute, former Saudi Ambassador to London and Washington, and former Director of Saudi Intelligence), and former Prime Minister of Egypt Essam Sharaf. Several former Arab Ambassadors to Egypt and Chinese ambassadors and envoys to the MENA region also spoke in the webinar, followed by academicians from both China and the Arab countries. The webinar came just a week after the China-Arab Ninth Ministerial Meeting Chaired by Chinese State Councilor and Foreign Minister Wang Yi. Most of the Arab academicians were from the United Arab Emirates Al-Sharjah University.All the speakers agreed on the importance of China-Arab cooperation to both combat the COVID-19 pandemic and achieve economic development, peace and stability in the region. Even cooperation between the U.S. and China in the Middle East was called for by some speakers, including Askary and an American professor at the National Defense College in the U.A.E.

Askary opened his speech by referring to the vision developed over the past three decades by “the great American economist” Lyndon LaRouche, Helga Zepp-LaRouche and associates in the Schiller Institute, which have now evolved into the World Land-Bridge. Askary showed the map of the World Land-Bridge, stating that it is necessary to bring the Americas and the United States into this vision. He praised the announcement of the Belt and Road Initiative by President Xi Jinping as “a turning point in world history.” Askary then, referred to the massive potential for development through peaceful economic development in West Asia and Africa. Since, the theme was Chinese-Arab cooperation against and post COVID-19 pandemic, Askary brought up the “correlation” between infrastructure development and creating a global health care system drawing from speeches by Xi and WHO Director General Dr. Tedros Adhanom Ghebreyesus, a report by the Asian Infrastructure Investment Bank (AIIB) and concluding with the recent study conducted by the Schiller Institute on creating a global healthcare system. Askary ended his remarks by showing the participants copies of the Schiller Institute reports on the New Silk Road in both Arabic and English, offering to send copies as gifts.