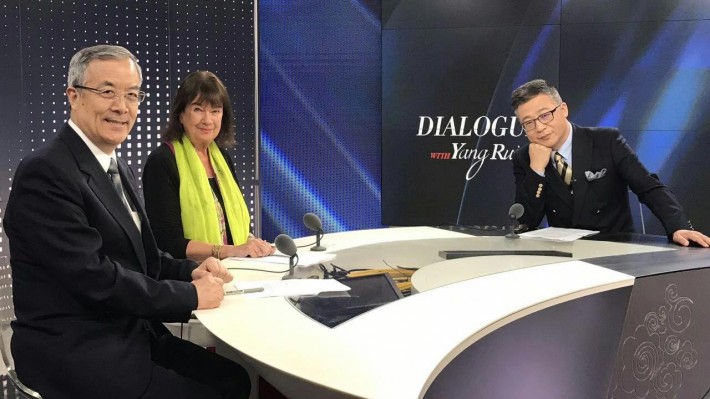 Today, Schiller Institute Founder and Chairwoman Helga Zepp-LaRouche issued the following statement regarding the vicious anti-China campaign being promulgated in the West, especially in the United States:

April 16—I think this anti-China campaign comes from a deep-seated geopolitical view that the rise of China necessarily means the downfall of the United States and the West in general. And I think that that view is a wrong view. China has at no point threatened to replace the United States as the hegemonic power. They have offered cooperation on the basis of a win-win cooperation. They have offered the United States a special great power relationship. And it is an absolutely absurd idea that one can prevent a country of 1.4 billion people, which has determined that it wants to go forward on the road of scientific and technological progress—and has proven that that method functions, by lifting 850 million people out of poverty, and then, is starting to offer the advantage of such an approach to others through the Belt and Road Initiative—that you can stop that, other than by nuclear war! And that is, obviously, unfortunately, what some people are willing to toy with.

China is not an aggressive force. But naturally, it does threaten the idea of a unipolar world order, which some neo-con and British elements had tried to impose in the period after the collapse of the Soviet Union, through interventionist wars. The Bush Administration and then also Obama conducted all of these interventionist wars, with the idea of regime change and color revolution, and that has gotten us to the crisis we have now in Southwest Asia and the refugee crisis.

But the idea that you have to stop the rise of China is very dangerous. And we see it right now, that this campaign is absolutely led by British intelligence. As a matter of fact, after President Trump, unfortunately, cancelled the U.S. funding of the WHO, by blaming them that they have been responsible for many deaths, because they misinformed the United States—I don’t even want to comment on that, because it’s just factually not correct—then, the former head of MI6 came out yesterday and said that Trump should not have focused on the WHO, but on China. And the Henry Jackson Society [in the U.K.], which is totally neo-con and one of the worst reactionary institutions you can imagine, put forward a proposal that the West should sue China, so that China would have to pay for all the costs which have resulted from the pandemic!

Now, the fact that the German tabloid Bildzeitung published this concept today, on page 2, the full story, quoting the Henry Jackson Society, having a long list of proposed bills—what was the cost for the taxi drivers, the hotel owners, just 20 categories—that China should have to pay. And after yesterday, when they had Pompeo on page 3 listing all the arguments against China—that is the final proof that this Bild tabloid is part of the Integrity Initiative, the British intelligence operation controlling the Western press. Formally or not, I don’t care—but de facto they’re spreading the propaganda of the British Empire. They just proved that in the last days, if such proof was still necessary.

But they are trying to hype up the population against China, and it is factually absolutely not true! I’ll just cite some figures, because, when they say that China was “hiding” information about the virus, it is factually not true.

• The first cases of some new, unknown disease became known in Wuhan on the December 23, 2019.

• Then, on December 30th, they reported a suspicious number of people having pneumonia.

• Then on January 3rd, the Chinese National Health Commission issued guidelines on how to treat these cases.

• And already on January 4th, those medical people in Wuhan contacted their U.S. counterparts and the WHO, and informed them about that.

• Then, only three days later, on January 7th, the medical scientific personnel in Wuhan were able, for the first time, to isolate the coronavirus strain. The extraordinary speed in which they succeeded in isolating this new strain was praised by the whole international medical community.

So, I think that that is the record. And I remember, because we were following this closely when it happened.

At that point, already, given the fact that there had previously been SARS and MERS, the Western governments could have absolutely mobilized their production of masks, ventilators, hospital beds, and so forth; but they didn’t do it! Instead, they kept repeating for weeks and weeks, “No, masks are absolutely of no use.” German Health Minister Jens Spahn said, “Oh, the virus will never come to Germany.” He kept repeating that into February, saying the German health system is perfectly prepared for any eventualities. They really did not take it seriously until March, when the whole thing erupted with a speed which left everybody breathless. And even then, they kept saying, you don’t need masks. They did not say: You do need masks, you do need mass testing, let’s produce everything which is necessary. Instead they kept adjusting the line about what was medically necessary to what their meager resources were. And that is a fact. You can say that for all European countries, and it’s still going on, to a certain extent, now.

So, I think that the attack on China is the most foolish, most immoral, lying operation, because if there is one country which did succeed, at least for now—because it’s a pandemic, you never know what will happen down the road—but they were able to contain and stamp out the virus in the hotbeds of Hubei Province and the city of Wuhan. And rather than thinking: maybe it was the centralized government system which China has, which was the reason why they were able to react so quickly, to gear up the production of the entire country; and maybe it was the extreme liberalism of the West which was the reason why it was not possible; maybe one should think that the liberal/neo-liberal system has some inherent flaws. Rather than discussing that, they go into this deflection and attack China.

I think it’s very dangerous, and it’s very stupid. And I think it should stop, and people should really not be led by the nose by these lying mass media, which have nothing to do with journalism. They’re really just the forefront of the intelligence community, trying to feed propaganda in order to further their aims. But it has nothing to do with honest journalism, at all.