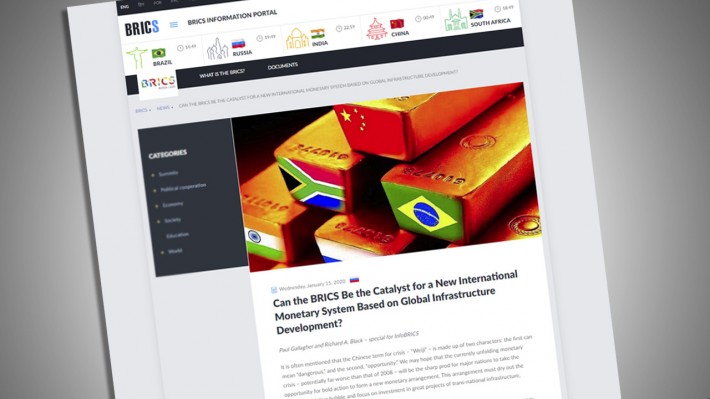 The BRICS international website, infobrics.org, recently published an article with the banner headline, “Can the BRICS Be a Catalyst for a New International Monetary System Based on Infrastructure Development?,” by Paul Gallagher of Executive Intelligence Review (EIR) and Richard A. Black of the Schiller Institute.  The 2,000 word article proposes solving the current monetary meltdown crisis by applying the economic science of Lyndon LaRouche for national development to the BRICS’s currently under-utilized New Development Bank (NDB) and proposes the creation of a new Russian Bank for Infrastructure and Industry.  The article was submitted to the BRICS by the Russian National Committee on BRICS Research.

After outlining the explosive danger created by current Anglo-American monetary policy, the article points to a solution:
“Two members of the BRICS, China and Russia, are already involved in new initiatives which are breaking with the old patterns of non-investment in infrastructure: China’s Belt and Road Initiative (BRI) and the Russian Federation’s plan to “light up Africa” with nuclear-power vectored electricity generation. The American physical economist, Lyndon LaRouche, had shown in research papers published over many years, that major infrastructure—high-speed railroads, third and fourth generation nuclear power, major water management systems—are the central and irreplaceable producer of added value in a national economy. LaRouche had shown that “the actual role of infrastructure in a viable form of economy… amplifies the productive powers of labor, a science-driven increase of physical productivity at the point of production.” Let us examine how the New Development Bank of the BRICS could be expanded in size and in conception to become a seed-crystal for a new monetary system for development.”
The proposed creation of a Russian Bank for Infrastructure and Industry is then used as a template, showing the way for the creation of other such national banks, as well as US participation, based on the proven principles of Hamilton. Read the full article >>>