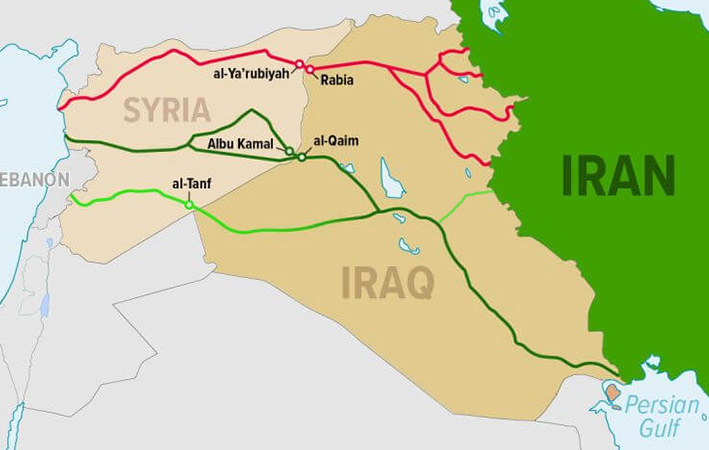 In November 2018, Iran, Iraq, and Syria reached a provisional agreement to build a “land-bridge” railroad and highway corridor extending from the Persian Gulf in Iran through Iraq to the Mediterranean port of Latakia in Syria, a distance of 1,570 km (975 miles). In combination with the Belt and Road Initiative, it could transform the intervening three nations. The construction of the first phase of the project is soon to begin.

The first phase is to build a 32 km railroad between Shalamcheh in southwestern Iran on the Iraq border, and Basra, Iraq. This involves building a few sections of rail line that are needed, and a bridge that would arch over the Arvand Rud/Shatt Al-Arab, a marsh-influenced waterway below the confluence of the Tigris and Euphrates Rivers.

The second, longer phase of the transport corridor would build the railroad, and some sections of highway, from Basra, 1,545 km to the Syrian port of Latakia on the Mediterranean.

The northern (red) and southern (green) routes of the land bridge. The southern route has upper and lower branches that pass, respectively, through al-Qaim/Albu Kamal and al-Tanf. Source: Adapted from map by Franc Milburn in Strategic Assessment (Israel) and updated by Hussein Askary.

With this as a backbone, goods and people could move from Iran, northward by the North-South corridor; from Iran eastward to China and the Pacific; or from Latakia, Syria westward to the Atlantic. This is especially important for the peoples of these three nations, who have been ravaged by war for decades. A tripartite meeting in July 2019 among the three nations’ transport officials confirmed “that the goal of the negotiations is to activate the Iranian-Iraqi-Syria load and transport corridor as a part of a wider plan for reviving the Silk Road.”

This transnational railway meshes perfectly with the plan that Iraqi Prime Minister Adil Abdul-Mahdi signed during his signed Sept. 19-23, 2019 visit to Beijing, to set up an Iraqi-Chinese Reconstruction Fund, into which Iraq could deposit the revenues of 300,000 barels of oil/day, against which Chinese banks will issue credit to Chinese companies to reconstruct Iraq.

The financing for the transnational railway project was lined up when on Sept. 18, 2019, with the announcement that Iran’s Mostazafan Foundation, which is a large semi-Hamiltonian organization that runs hundreds of factories and commercial enterprises, would advance the majority of the financing.

A difficulty is that one of the Mostazafan’s companies, the Sina Bank, has been sanctioned by the United States, and it is not clear if the sanctions announced Jan. 10, 2020 by U.S. Treasury Secretary Steven Mnuchin and Secretary of State Mike Pompeo will block even more of the Mostazafan Foundation’s activities, which could blow up the entire transnational project.

This leads to a higher point: the relentless attack on this region is the British Empire venom against the Belt and Road Initiative, the development of this region, and the world. Helga Zepp-LaRouche’s proposal to convene a three Presidents summit is urgent to raise the world to a higher dimensionality of thinking.