Houston Community Meeting Mobilizes for Project Artemis and Beyond 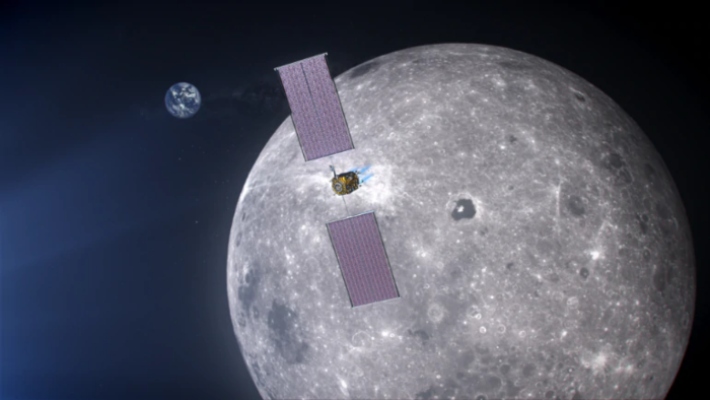 Houston Community Meeting Mobilizes for Project Artemis and Beyond

by Kesha Rogers and Brian Lantz

That extraordinary accomplishment of American astronauts landing on the surface of the Moon for the first time—“in peace for all mankind”—was followed by twelve more astronauts, participating in another six missions. The last mission was in 1972. That was the Apollo program, a program to go to the Moon and explore the lunar surface. The Apollo 17 astronauts would be the last to walk on the surface of the Moon. Following that last mission, despite several additional planned missions, the program was unceremoniously ended and funding for the future Apollo missions was cut. However, the cutbacks didn’t start abruptly in 1972; the mission was being chipped away at even as the Apollo program was getting started—the peak in funding was in 1966.

“Have you heard? We are going, not back, but forward to the Moon again! This time to stay!” The Shackleton Crater is the proposed landing site for the next Moon mission. Shackleton is an impact crater that lies at the lunar South Pole. 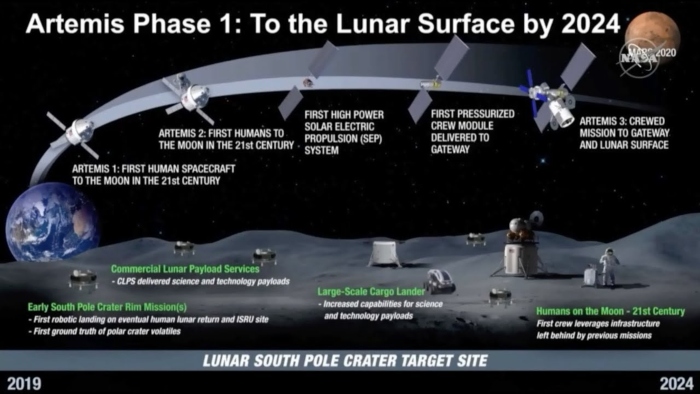 The bold and exciting new mission to return American astronauts to the surface of the Moon is Project Artemis, named for Apollo’s twin sister Artemis, the goddess of the Moon. Well, you may ask, this all sounds very exciting and optimistic, but how will it be done? We haven’t been back in nearly 50 years. What will be different now? How will we guarantee that we not only achieve the goal of returning to the Moon and go to Mars, but build a commitment and a policy with lasting impact for several generations to come?

Houston Meeting, Shooting for the Moon

The Schiller Institute is hosting conferences and seminars around the world, not only to educate people on the requirements for returning Americans to the lunar surface in 2024 and building a lunar base by 2028, but going beyond—setting forth a vision for the next two to three generations of space exploration.

In Houston, Texas on July 25, just one day after the 50th anniversary of the splash down of the Apollo 11, the Schiller Institute had its most recent such event. The theme of the community meeting was, “50 Years After Apollo: NASA’s Project Artemis, A New Generation of Space Explorers Emerges.” The meeting, held at the Bayland Community Center, was a major outreach effort with broad attendance and participation. The audience included blue collar families from the Houston neighborhood, university students, a high school science club, friends of the Fabrication and Innovation Laboratory at a local college, robotics club members, families with NASA ties, members of several local AARP chapters who had previously invited the Houston Schiller Institute Chorus to their meetings, and longtime Schiller Institute activists. There was great excitement following the presentations.

The environment was electric from the start! Attendees were greeted with a fascinating “Fabrication Lab” exhibit on 3D printing, overseen by the lab’s supervisor. 3D printing in its industrial applications is known as additive manufacturing and will be a crucial feature of building cities on the Moon and Mars. 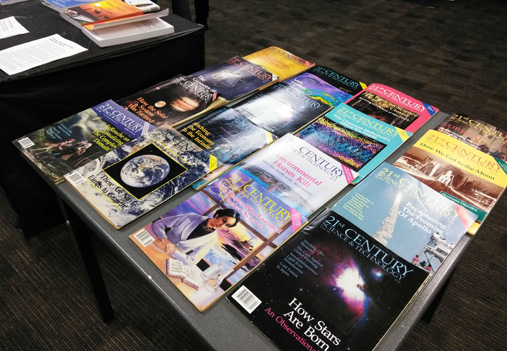 There were also NASA memorabilia and models of a scramjet and a Space Shuttle. Also on display was an exhibit from the Houston Robotic Club, which brought a working robotic Moon/Mars Rover, built to NASA/Jet Propulsion Laboratory (JPL) specifications. Discussion was continuous around the tables, including the Schiller Institute’s table and a display of Fusion and 21st Century Science and Technology magazines. Attendees got a direct idea of breakthrough work in 3D printing and robotics applications that are relevant for use here on Earth and in space travel and exploration. A group of high school students, all members of a robotics club, had a great time at both exhibits. Many people saw a 3D printer and a robot, up close, for the first time, and were able to talk to experts about the technologies involved.

Attendees also gained greater insight into international cooperation in space by seeing material from a project called “United in Space.” The project’s mission is to promote space cooperation between the United States and Russia. It is involved in creating and placing a statue of Neil Armstrong in Russia. The United in Space display included a scale model of the statue of Armstrong and announced that ground had been broken in Russia for the placement of a life-size statue. The Russian-American founder of United in Space has already placed a statue of Russian Cosmonaut Yuri Gagarin, the first human to fly in space, in Houston, Texas.

The program was opened by Kesha Rogers, Lyndon LaRouche’s representative in Houston, speaking for the Schiller Institute. She presented a dramatic overview of the Artemis Project, opening with a 3-minute NASA film titled, “We Are Going,” which drew applause and shouts from the entire room. Rogers outlined the Artemis Project with detailed slides drawn from NASA and NASA contractors, including the project’s phased development, emphasizing NASA Administrator Jim Bridenstine and President Trump’s declarations that international cooperation would be required for Project Artemis to succeed.

We need cooperation with Russia, Europe, India, Japan and China, and the more so because Trump has committed the United States to use the Moon as a jumping off place to go to Mars, Rogers explained. She made clear that this perspective had been laid out by economist and statesman Lyndon LaRouche, inspired by his collaboration with German-American rocket engineer Krafft Ehricke and many other scientists who worked with the Fusion Energy Foundation in the 1970s and 1980s.

A video except from a 2009 speech by LaRouche was shown, in which LaRouche outlined a future Mars mission as a “science driver” project for the United States, which would simultaneously require cooperation with Russia, China, and other nations, and thereby contribute to securing peace on Earth. Rogers then introduced a special guest, the Vice Consul of the Consulate General of the Russian Federation in Houston, Dr. Viacheslav Levchick, PhD, who received a warm greeting from the audience.

The View From Russia

Vice-Consul Levchick outlined some of his country’s work in space, stressing that he thought that cooperation between Russia and the U.S. had “a solid basis,” based on his visits to Johnson Space Center and the cooperative work on the International Space Station. He talked about some of Russia’s recent contributions, including the “Single Pass” delivery of astronauts to the Moon, which shortens the trip from six hours to two hours, saving astronauts and cosmonauts from exhausting trips as well as saving on costs and equipment. This drew audible agreement from the audience.

He also underscored the important breakthroughs in astronomy that are expected from the Specter RG telescope satellite, launched in July. Russia has its own lunar program, but the Vice-Consul wanted to stress the importance of ongoing cooperation, saying, “In 1998 when the first models of the ISS were launched, it was the U.S. and Russia who did it.”

Now there is a rapidly growing private space sector in many countries. “This is like the dreams of our fathers—or my grandfathers,” the youthful Vice Consul added, drawing chuckles. “It is important that we can talk casually about such huge projects,” he said. All nations are going to the Moon’s South Pole, adding that helium-3, along with ice water, are the major resources being sought. Russia, he reported, plans a manned landing on the Moon by 2030 and a permanent presence by 2040, adding that India and China have similar plans. Vice Consul Levchik’s relaxed and humorous remarks were warmly received by the audience and elicited numerous questions.

The Last Time We Went to the Moon

The next speaker was retired NASA and TRW scientist F. Don Cooper, who began working at the George C. Marshall Space Flight Center, Huntsville, Alabama in 1962. Cooper, an Oklahoma native, was soon assigned, as a young physicist and mathematician, to develop the targeting equations for Trans-Lunar Injection (TLI), which guided the Apollo projects to the Moon. Then from Houston, Cooper worked on eight Apollo missions, including Apollo 11 and Apollo 13. He also worked on the Atlas Centaur, the Air Force Dyna-Soar space plane, and the early planned Mars mission NOVA rocket. Cooper gave a very exciting presentation, which took his audience to the Moon, landed on the Moon, and back to Earth with Apollo 11, with a model Saturn V rocket, astronaut voice recordings, graphics, and whiteboard sketches, all making it come alive. 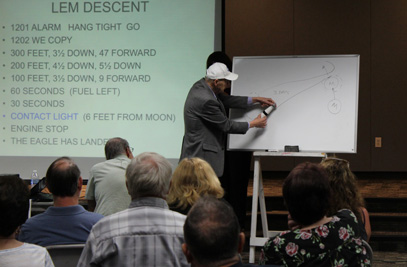 Since his retirement, Don Cooper has found a new calling—that of encouraging a new generation of students to pursue a future in the physical sciences. He enjoys speaking to youth groups, among others, hoping to inspire the technology leaders of the future with his first-hand account of the events as they actually happened. “Of the seven primary people who did this, I am the last one alive,” said Cooper recently. “Students do not know much about Apollo since it all happened before they were born. My objective is to show them how it happened, emphasize that education is essential, and show how math and physics solve real-world problems.” Cooper makes the point that “Apollo 13 was saved by thousands of nerds.”

Brian Lantz, Schiller Institute spokesperson in Texas, addressed the audience on the need for a science driver perspective to realize the full potential of a Moon-Mars colonization over the next 50 years, as developed by the great visionaries, Krafft Ehricke and Lyndon LaRouche. He made clear that a Moon-Mars program is needed for transforming human civilization. A program to fully colonize the Moon and Mars will require major breakthroughs in science and technology, including a crash program for the development of thermonuclear power and fusion propulsion systems for space travel. The ability to sustain a long-term human presence requires the building of major infrastructure and the building of functional and beautiful cities on the Moon and Mars. This will require construction from the Moon’s regolith. 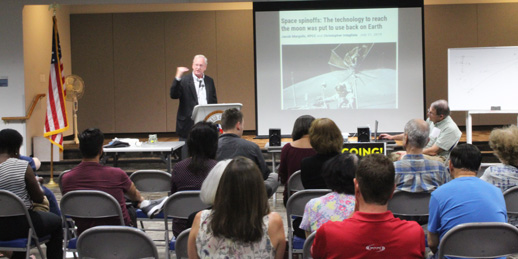 Cutting-edge technologies will have to be further developed, including robotic machines for mining and the production and assembly of habitats on the Moon and Mars. More powerful lasers and other electromagnetic plasma beam systems will be required for communications, for additive construction and manufacturing, and the mining of helium-3. Lantz presented LaRouche’s idea, made famous in the 1988 “Woman on Mars” television broadcast, that we require a telescope with the aperture of the Mars orbit, a concept that drew surprised gasps from the audience. As Lyndon LaRouche outlined in 1986, we will build a civilization on Mars, with cities of hundreds of thousands of productive human beings, because that is what will be required.

What will such an investment cost us? A Moon-Mars project, over two or three generations, will cost us nothing, Lantz emphatically stated. The importance of the American System of economics and the re-creation of a credit system and National Bank, as was understood and developed by our nation’s first Treasury Secretary, Alexander Hamilton, and used effectively by Presidents Abraham Lincoln and Franklin Roosevelt will be necessary. We know this from the Apollo program, which returned 10 cents back for every penny we spent. How is that possible? The source of wealth is human creativity. We must unleash human creativity and reorganize the financial side of things accordingly. After all, we have done it before.

President John F. Kennedy launched one of the greatest economic recovery and national credit programs the nation has ever seen, through the unleashing of the creativity of the population through the Apollo program. Indeed, a Moon-Mars colonization program—advancing through the long-term success of the Artemis program and the advancement of mankind in the Solar system—will multiply the productivity of our civilization while it uplifts mankind, as every human being’s capacities will be required.